THE BILL OF WRONGS...

OR.... why the government must never be allowed to take over our health care system
I

The USPS recorded a loss of $2.8 billion for fiscal year 2008. Its debt increased by $3 billion by the end of the year to $7.2 billion. [SOURCE: GAO, 1/28/2009  http://www.gao.gov/products/GAO-09-332T ] The US Postal Service was established in 1775. (The biggest problems with the USPS are private competition, unionized workers, and lobbyists) The government has had 234 years to get it right and it is broken.

Social Security expenditures are expected to exceed tax receipts this year for the first time since 1983. The projected deficit of $41 billion this year. Social Security was established in 1935. The government has had 74 years to get it right and it is broken. [SOURCE: SOCIAL SECURITY ONLINE, 2010 ANNUAL REPORT  http://www.ssa.gov/oact/trsum/index.html ]

Freddie Mac reported that it lost $4.1 BILLION in the third quarter of 2010, and said it needed $100 million in new federal support. [SOURCE: http://topics.nytimes.com/top/news/business/companies/freddie_mac/index.html?inline=nyt-org ] Freddie Mac was established in 1970. The government has had 39 years to get it right and it is broken.

War on Poverty started in 1964. It has cost $8 TRILLION so far and poverty is greater now than ever. [SOURCE: HUBPAGES http://hubpages.com/hub/War-on-Poverty-has-cost-8-trillion-dollar-and-poverty-is-greater-now-than-ever ] The government has had 45 years to get it right; $1 TRILLION of our money is confiscated each year and transferred to "the poor" and they only want more. [See also   http://www.heritage.org/research/reports/2009/09/obama-to-spend-103-trillion-on-welfare-uncovering-the-full-cost-of-means-tested-welfare-or-aid-to-the-poor ]

The costs of Medicare doubled every four years between 1966 and 1980 Total MEDICARE spending reached $440 billion for fiscal year 2007 or 16% of all federal spending and grew to $599 billion in 2008 which was 20% of federal spending. [SOURCE:   http://en.wikipedia.org/wiki/Medicare_(United_States) ] The only larger categories of federal spending are Social Security and defense. Medicare was established in 1965. The government has had 44 years to get it right and they are broke. [This does not include Medicaid, which is paid for by the federal government AND the states. Much of the costs of Medicaid have been shifted to the SCHIP program.]

The Department of Energy was created in 1977 by Jimmy Carter to lessen our dependence on foreign oil. It has ballooned to 16,000 employees with a budget of $24 BILLION a year. As part of the $789 billion economic stimulus package in the American Recovery and Reinvestment Act of 2009, Congress provided Energy with an additional $38.3 BILLION for fiscal years 2009 and 2010, adding about 75 percent to Energy's annual budgets. [SOURCE: http://en.wikipedia.org/wiki/United_States_Department_of_Energy ] We import more oil than ever before. The government has had 32 years to get it right and it is an abysmal failure.

AMTRAK is a government-owned corporation that was organized on May 1, 1971, to provide intercity passenger train service in the United States [SOURCE:   http://archive.gao.gov/d13t3/129743.pdf  document contents redacted] In 2008 the federal government spent about $1.4 billion on Amtrak. The Pew Charitable Trusts SubsidyScope Project has just released (10/27/2009) a new report that finds 41 out of Amtrak's 44 routes lose money. The losses ranged from nearly $5 to $462 per passenger, depending upon the line, and averaged $32 per passenger. Nothing succeeds in DC like repeated and costly failure. The Obama administration put $13 BILLION for building various new high-speed rail lines in its $787 billion dollar stimulus package. The government has had 32 years to get it right and it is a failure.

The Department of Education was created by Jimmy Carter on October 17, 1979. It was made a separate department by dividing HEW (Health, Education and Welfare) into DoED and HHS. For 2006, the ED discretionary budget was US$56 billion and the mandatory budget contained $23.4 billion. Currently, the budget is $68.6 BILLION. The Organization for Economic Cooperation and Development places the United States 18th among the 36 nations examined. [SOURCE:  http://www.upi.com/Top_News/2008/11/19/US-slipping-in-education-rankings/UPI-90221227104776/ ] In the OECD's Programme for International Student Assessment 2003, 15 year olds ranked 24th of 38 in mathematics, 19th of 38 in science, 12th of 38 in reading, and 26th of 38 in problem solving. In the 2006 assessment, the U.S. ranked 35th out of 57 in mathematics and 29th out of 57 in science. [SOURCE:   http://en.wikipedia.org/wiki/Programme_for_International_Student_Assessment ] The government has had 32 years to get it right and the performance of our children is getting worse instead of better.
at February 10, 2011 2 comments:

THIS MAN HAS NO CONSCIENCE - HE IS TRULY A SOCIOPATH

Many of you watched the B.O. / B.O. 15-minute interview before the Super Bowl last Sunday. O’Reilly asked Obama why he was raising taxes when he pledged not to. Obama’s reply was, ‘Bill, I didn’t raise taxes once – I’ve lowered taxes over the last two years’. LIAR! And O’Reilly LET IT RIDE!

Below is a list of tax increases released last April by the House Ways and Means Committee, showing more than $670 billion in tax increases that Democrats have signed into law since January of 2009, when Barack Obama took office. The list includes “at least 14 violations of the President’s pledge not to raise taxes on Americans earning less than $200,000 for singles and $250,000 for married couples,” totaling more than $316 billion in tax increases for middle class families.

Between January, 2009 and April, 2010, President Obama and Congressional Democrats have enacted into law gross tax increases totaling more than $670 billion, or more than $2,100 for every man, woman and child in the United States. The list of tax increases includes at least 14 violations of the President’s pledge not to raise taxes on Americans earning less than $200,000 for singles and $250,000 for married couples.

New ban on the purchase of over‐the‐counter drugs using funds from FSAs, HSAs and HRAs*

Increase the Medicare tax on wages and self‐employment income by 0.9% and impose a new 3.8% surtax on certain investment income (for individuals over $200,000 and couples over $250,000)

Increase, from 7.5% to 10% of income, the threshold after which individuals can deduct out of pocket medical expenses*

Eliminate the deduction for expenses allowable to Medicare Part subsidy

Limit the deduction for compensation to officers, employees and directors of certain health insurance providers

Impose a Tax on the sale of your home – 3.5% (THIS IS NOT INCLUDED IN THE TOTAL TAX INCREASE SHOWN BELOW!!!)

*VIOLATES PRESIDENT’S PLEDGE TO NOT INCREASE TAXES ON MIDDLE CLASS

Embedding has been disabled for this interview, but go here and skip to 1:10 in the interview.

THIS SHOULD BE REQUIRED READING... (and notice that it's a SINGLE PAGE) 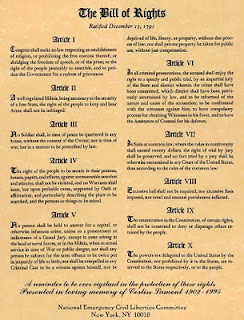 THE FIRST 10 AMENDMENTS TO THE CONSTITUTION AS RATIFIED BY THE STATES a/k/a/ "The Bill of Rights"
Amendment I
Congress shall make no law respecting an establishment of religion, or prohibiting the free exercise thereof; or abridging the freedom of speech, or of the press; or the right of the people peaceably to assemble, and to petition the Government for a redress of grievances.
Amendment II
A well regulated Militia, being necessary to the security of a free State, the right of the people to keep and bear Arms, shall not be infringed.
Amendment III
No Soldier shall, in time of peace be quartered in any house, without the consent of the Owner, nor in time of war, but in a manner to be prescribed by law.
Amendment IV
The right of the people to be secure in their persons, houses, papers, and effects, against unreasonable searches and seizures, shall not be violated, and no Warrants shall issue, but upon probable cause, supported by Oath or affirmation, and particularly describing the place to be searched, and the persons or things to be seized.
Amendment V
No person shall be held to answer for a capital, or otherwise infamous crime, unless on a presentment or indictment of a Grand Jury, except in cases arising in the land or naval forces, or in the Militia, when in actual service in time of War or public danger; nor shall any person be subject for the same offence to be twice put in jeopardy of life or limb; nor shall be compelled in any criminal case to be a witness against himself, nor be deprived of life, liberty, or property, without due process of law; nor shall private property be taken for public use, without just compensation.
Amendment VI
In all criminal prosecutions, the accused shall enjoy the right to a speedy and public trial, by an impartial jury of the State and district wherein the crime shall have been committed, which district shall have been previously ascertained by law, and to be informed of the nature and cause of the accusation; to be confronted with the witnesses against him; to have compulsory process for obtaining witnesses in his favor, and to have the Assistance of Counsel for his defence.
Amendment VII
In suits at common law, where the value in controversy shall exceed twenty dollars, the right of trial by jury shall be preserved, and no fact tried by a jury, shall be otherwise reexamined in any Court of the United States, than according to the rules of the common law.
Amendment VIII
Excessive bail shall not be required, nor excessive fines imposed, nor cruel and unusual punishments inflicted.
Amendment IX
The enumeration in the Constitution, of certain rights, shall not be construed to deny or disparage others retained by the people.
Amendment X
The powers not delegated to the United States by the Constitution, nor prohibited by it to the States, are reserved to the States respectively, or to the people.
=========================
The Rejected Rights Guarantees Included
in James Madison's Original Bill of Rights:
1. "No person religiously scrupulous of bearing arms shall be compelled to render military service in person."
2. "No State shall violate the equal rights of conscience, or the freedom of the press, or the trial by jury in criminal cases."
[Madison called this guarantee, extending protections of the First Amendment and the jury trial right of the Sixth Amendment to the states, "the most valuable amendment in the whole lot." It passed the House, but was rejected by the Senate.]

THE GOOD, THE BAD, AND THE UGLY

· Has aligned Venezuela with U.S. enemies, including Iran and Syria
· Gets support for his nuclear program from Russia
· Trade between Venezuela and the United States decreased by more than half in the first semester of this year (2009)

OBAMA GREETS CHAVEZ WITH LAUGHS AND SLAPS ON THE BACK!
(Republican Sen. John Ensign (R) of Nevada, appearing on CNN the following Sunday, said it was "irresponsible" for Obama to be seen "laughing and joking" with the Venezuelan president.)
MUBARAK:
· Age: 82
· Sunni Islam
· President ( dictator) of Egypt since 1981, following assassination of Anwas Sadat
· Was career Air Force before entering politics
· Has supported the Egypt-Israel Peace Treaty signed by Sadat
· Allied Egypt with the west in the 1991 Gulf War (when the US was hunting for a military alliance to force Iraq out of Kuwait, Egypt's president joined without hesitation and committed 35,000 Egyptian troops)
· Does not support America’s immediate withdrawal from Iraq
· Shuts down internet during uprising
· In May of 2009, the United States and Egypt signed a Plan for a Strategic Partnership, with the goal of fostering increased bilateral economic cooperation, especially in regards to trade. Already, the United States and Egypt share a robust trading relationship; with $8.4 billion in goods being exchanged in 2008
· Mubarak has condemned the use of violence by extremist groups.
· His friendships with Western leaders, and his recognition of Israel and its right to exist have been dangerous for him, as they were for Anwar Sadat, and have cost him political and popular support.
· Nine out of ten women in Egypt suffer the mutilation called female circumcision. Mubarak has twice outlawed this practice, without success - the imams say it part of the islamic faith.

OBAMA URGES MUBARAK TO STEP DOWN – this represents the wholesale and opportunistic abandonment of one of the West’s key allies in the Middle-east.
[NOTE: The general view in the Middle East seems to be that the US is selling out its allies and interfering in Egypt’s affairs in pursuit of its own agenda. Supporters of the Islamic Brotherhood protesting in London make clear what history makes obvious - that democracy and sharia are incompatible. The Islamic Brotherhood wants democracy only long enough to implement Islamic law.]
at February 08, 2011 No comments: