AN OPEN LETTER TO REPUBLICANS IN CONGRESS

I voted for you on the off chance you could slow, if not stop, the destruction of this country.  I did NOT vote for you to go to Washington and roll over for President Obama.

I am glad the sequestration is about to kick in.  As a nation, if we cannot cut 3 cents of every dollar currently proposed to be spent, they we are in deep doodoo already.  I’m not happy with the defense cuts because I happen to think we live in a more dangerous world than ever before, and I think national security should be a priority.

The Defense Department is railing about not being able to fuel its ships or deploy the carrier fleet USS Harry S. Truman.  I agree we need to be battle ready.  To the Republicans, I suggest passing a one paragraph BILL funding that carrier fleet for one year.  Offset the cost by cutting foreign aid to Egypt  [or to some OTHER country that loves us] in the same amount.  Send it to Obama.  He can sign it or not – it becomes his decision:  NATIONAL SECURITY OR FOREIGN AID.

We want border security.  Pass a one page bill funding everything required to secure the borders.  Offset these expenditures by cutting an equal amount from the EPA.  Send it to Obama.  He can sign it or not – it becomes his decision:  BORDER SECURITY OR MORE REGULATIONS.

I did NOT vote for you to go to Washington and roll over for President Obama.  Start cutting spending, one line item at a time.

STOP GIVING AWAY AMERICA TO THE SOCIALIST IN THE WHITE HOUSE!

As for my neighbor State of Virginia, which has thousands of defense employees and contractors that may be furloughed or laid off, including many at the Pentagon, Norfolk shipyards, and Hampton Roads, to mention a few…. I say this.  You voted for Obama, your state went in his column last November…. Elections have consequences.  Deal with it.

Anyone wishing to use the first five paragraphs in this rant to share this opinion with your senators or representative,  please feel free to do so.  You can locate them at the following links:

WANNA RETIRE? PLAN AHEAD...... WAY AHEAD

Jesse Helms, former North Carolina Senator, was a Conservative’s conservative.  You could count on him to vote ‘NO’ on anything put forth by the left, and on most things put forth by the right.  He treated the federal purse like his own wallet and almost always voted on the side of reducing expenditures, and not incurring new ones.

In the 90’s Helms supported a bill allowing personal retirement accounts as a supplement to Social Security. [It went down in flames.]  Ahead of his time, he proposed privatizing Social Security and getting the government out of the retirement business. [His fellow Senators backed away from him like he was contagious.]  Bush 43 made a valiant effort to privatize Social Security and lost most of his ‘political capital’ doing it.  The left went berserk and screamed ‘HE WANTS TO TAKE AWAY YOUR SOCIAL SECURITY’.  Today we are paying the price for this demagoguery.  This can’t be fixed quickly, and it will NEVER be fixed if we don’t BEGIN. 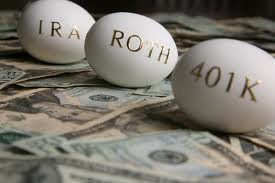 A defined benefit retirement plan is a type of pension plan in which an employer/sponsor promises a specified monthly benefit on retirement that is predetermined by a formula based on the employee's earnings history, tenure of service and age.  It also assumes that the employer will stay afloat long enough to fulfill these promises.  Monies are placed in accounts for the employee – very small amounts early in their tenure, but as the employee approaches retirement, the contributions increase drastically in order to arrive at that ‘promised amount’.  The biggest employer offering a defined benefit plan is the government.  Not just the federal government but most state governments as well. Social Security is also a defined benefit plan.  We are promised $X when we reach a given age, no matter WHAT we have personally contributed to the plan.  And there is no time limit on how long you can collect it.  The federal government is bleeding dollars because of this, yet those we elect refuse to do anything about it. And sadly, we have a citizenry too stupid or too apathetic to realize this cannot continue.

The private sector figured out years ago that the DB retirement plans would be a drain on the bottom line, and most went to the Defined Contribution, such as the 401K.  They tell you how much they are going to pay into your retirement plan NOW, allow YOU to invest in it as well, the plan is in YOUR name and usually under your control…. and you can plan your golden years when you are young.

If the government would go to the defined contribution plan (in other words, privatize Social Security and let the individual manage their own account within parameters set by the government) eventually, by attrition, the current SS system would simply fade away (or as Newt famously said – and was destroyed for saying – it would die on the vine).  A phasing IN of private accounts would one day get the government mostly OUT of the retirement business – at least for those citizens who WORK for a living.  The government also needs to change the retirement plan for all new hires, moving away from DB and into DC plans.

BTW – if you are eligible to have a ROTH IRA and don’t have one….. DO IT!  It’s the very best retirement plan ever created for the working person.  You contribute dollars you pay taxes on NOW (unlike a 401K), you get NO tax benefit NOW (unlike a 401K) but when you withdraw from it, you pay NO tax on the principal – only the earnings.  The attractive part of this is – you have NO IDEA what tax bracket you will be in when you retire, especially if people like Obama want to keep increasing the tax RATES.

Check this link to see if you qualify:
http://www.moneychimp.com/articles/rothira/contribution_limits.htm

IS THERE A GOVERNMENT AGENCY FOR......

If anyone wonders why we are up to our you-know-what in rules, regulations and DEBT - look at this list of government agencies and departments - all with their own little world to protect, fund and justify.

According to the Office of Personnel Management (OPM),  as of December 2011, there were approximately [1] 2.79 MILLION CIVIL SERVANTS *** (civilian, i.e. non-uniformed) employed by the US Government.   (This includes executive, legislative and judicial branches of government. This also includes more than 600,000 United States Postal workers.)  [***ROFLMAO @ 'servants']

Not one of these generates an income - they only suck your tax dollars into oblivion.....

THERE ARE MORE FEDERAL GOVERNMENT NON-MILITARY EMPLOYEES THAN THE POPULATION OF 20 OF THE STATES!