THE FIGHTER IN THE WHITE HOUSE....HE FIGHTS FOR ME!

The author of this piece has been misattributed in an email making the rounds.  Apparently Conservative author Evan Sayet wrote this column on President Trump - NOT former Livermore, CA Mayor Dr. Marshall Kamena (who apparently IS a Conservative Democrat)

My Leftist friends (as well as many ardent #NeverTrumpers) constantly ask me if I’m not bothered by Donald Trump’s lack of decorum. They ask if I don’t think his tweets are “beneath the dignity of the office.”

We Right-thinking people have tried dignity.  There could not have been a man of more quiet dignity than George W. Bush as he suffered the outrageous lies and politically motivated hatreds that undermined his presidency.

We tried statesmanship.
​​
Could there be another human being on this earth who so desperately prized “collegiality” as John McCain?

We tried propriety – has there been a nicer human being ever than Mitt Romney?

And the results were always the same. This is because, while we were playing by the rules of dignity, collegiality and propriety, the Left has been, for the past 60 years, engaged in a knife fight where the only rules are those of Saul Alinsky and the Chicago mob.

I don’t find anything “dignified,” “collegial” or “proper” about Barack Obama’s lying about what went down on the streets of Ferguson in order to ramp up racial hatreds because racial hatreds serve the Democratic Party. I don’t see anything “dignified” in lying about the deaths of four Americans in Benghazi and imprisoning an innocent filmmaker to cover your tracks. I don’t see anything “statesman-like” in weaponizing the IRS to be used to destroy your political opponents and any dissent. Yes, Obama was “articulate” and “polished” but in no way was he in the least bit “dignified,” “collegial” or “proper.”

The Left has been engaged in a war against America since the rise of the “Children of the ‘60s”. To them, it has been an all-out war where nothing is held sacred and nothing is seen as beyond the pale. It has been a war they’ve fought with violence, the threat of violence, demagoguery and lies from day one – the violent take-over of the universities – till today. The problem is that, through these years, the Left has been the only side fighting this war. While the Left has been taking a knife to anyone who stands in their way, the Right has continued to act with dignity, collegiality and propriety.

With Donald Trump, this all has come to an end.

During wartime, things like “dignity” and “collegiality” simply aren’t the most essential qualities one looks for in their warriors. Ulysses Grant was a drunk whose behavior in peacetime might well have seen him drummed out of the Army for conduct unbecoming. Had Abraham Lincoln applied the peacetime rules of propriety and booted Grant, the Democrats might well still be holding their slaves today. Lincoln rightly recognized that, “I cannot spare this man. He fights.”

General George Patton was vulgar-talking. In peacetime, this might have seen him stripped of rank. But, had Franklin Roosevelt applied the normal rules of decorum then, Hitler and the Socialists would barely be five decades into their thousand-year Reich.

Trump is fighting. And what’s particularly delicious is that, like Patton standing over the battlefield as his tanks obliterated Rommel’s, he’s shouting, “You magnificent bastards, I read your book!”

That is just the icing on the cake, but it’s wonderful to see that not only is Trump fighting, he’s defeating the Left using their own tactics. That book is Saul Alinsky’s Rules for Radicals – a book so essential to the Liberals’ war against America that it is and was the playbook for the entire Obama administration and the subject of Hillary Clinton’s senior thesis. It is a book of such pure evil, that, just as the rest of us would dedicate our book to those we most love or those to whom we are most indebted, Alinsky dedicated his book to Lucifer.

Trump’s tweets may seem rash and unconsidered but, in reality, he is doing exactly what Alinsky suggested his followers do. First, instead of going after “the fake media” — and they are so fake that they have literally gotten every single significant story of the past 60 years not just wrong, but diametrically opposed to the truth, from the Tet Offensive to Benghazi, to what really happened on the streets of Ferguson, Missouri — Trump isolated CNN . . . He made it personal.

Then, just as Alinsky suggests, he employs ridicule which Alinsky described as “the most powerful weapon of all.”... Most importantly, Trump’s tweets have put CNN in an untenable and unwinnable position. ... They need to respond. This leaves them with only two choices. They can “go high” (as Hillary would disingenuously declare of herself and the fake news would disingenuously report as the truth) and begin to honestly and accurately report the news or they can double-down on their usual tactics and hope to defeat Trump with twice their usual hysteria and demagoguery. The problem for CNN (et al.) with the former is that, if they were to start honestly reporting the news, that would be the end of the Democratic Party they serve.

It is nothing but the incessant use of fake news (read: propaganda) that keeps the Left alive. Imagine, for example, if CNN had honestly and accurately reported then-candidate Barack Obama’s close ties to foreign terrorists (Rashid Khalidi), domestic terrorists (William Ayers), the mafia (Tony Rezko) or the true evils of his spiritual mentor, Jeremiah Wright’s church. Imagine if they had honestly and accurately conveyed the evils of the Obama administration’s weaponizing of the IRS to be used against their political opponents or his running of guns to the Mexican cartels or the truth about the murder of Ambassador Christopher Stevens and the Obama administration’s cover-up.

So, to my friends on the Left — and the #NeverTrumpers as well — do I wish we lived in a time when our president could be “collegial” and “dignified” and “proper”?
Of course I do. These aren’t those times. This is war. And it’s a war that the Left has been fighting without opposition for the past 50 years.

So, say anything you want about this president - I get it - he can be vulgar, he can be crude, he can be undignified at times.

I can’t spare this man.

He fights for America!

THE BIGGEST COVER-UP YET - DOES HILLARY CLINTON HAVE PARKINSON'S DISEASE?

I posted a short blog about this last year during the election season.  My thoughts about this woman haven't changed other than I'm more convinced than ever that Hillary is NOT well and everyone around her is complicit in covering for her.

This video seems to show a textbook petit mal seizure.

"In atypical petit mal seizures, you might notice the head bobbing up and down. Check for fluttering eyelids. If the individual's eyelids are rapidly opening and closing, she might be having a petit mal seizure.


Listen to the gentleman narrating the video below...

The video below shows Hillary collapsing before being 'thrown' into her van.  Note that those around her don't seem to be concerned or surprised by this event - which took place in NYC on a bright 75 degree morning.


This video below shows 'Hillary' exiting Chelsea's apartment building 90 minutes after being thrown in the back of her (private ambulance) van when she seized and went limp .

My contention is that the woman you see here is a body double.  There are NO Secret Service anywhere nearby, and that would NEVER happen, considering what happened less than two hours earlier.

I have been noticing and researching Hillary’s symptoms for months and Parkinson’s is the conclusion I arrived at.

If you watch the video of her waiting for her car at the 9/11 memorial, you will see that her seizure – AND IT WAS A SEIZURE – was no surprise to her 16+ member entourage.

Seizures are often a product of and a symptom of Parkinsons.

(As an aside – these people ignored protocol that calls for the vehicle to be in place before the subject is brought to the pick-up point.  Hillary waited 2-3 minutes for her vehicle to arrive.  And by taking her to Chelsea’s apartment rather than to a hospital, they broke another protocol – BECAUSE THEY COULD NOT RISK A DOCTOR IN SOME E.R. WHO WAS NOT ON THE PAYROLL MAKING A DIAGNOSIS OF HILLARY’S CONDITION)

Ninety minutes after Hillary arrived at Chelsea’s apartment, she came strolling out looking fit as a fiddle.  ………… here is where the narrative – MY narrative – gets a little askew.

The woman that exited Chelsea's building was NOT Hillary Clinton.  (But as you see in the picture below - I AM NOT ALONE in thinking this!) 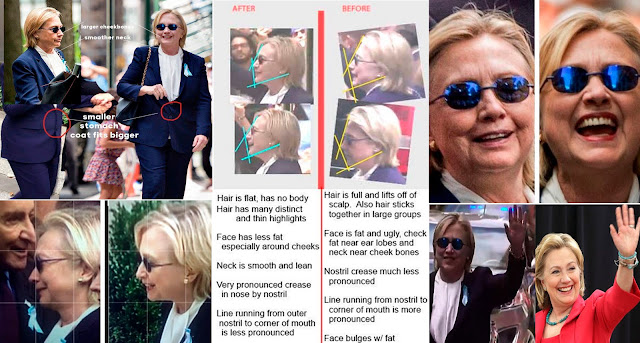 There’s no way Hillary could bounce back from her seizure AND PNEUMONIA (HER doctor’s diagnoses) in just 90 minutes.  I believe in my heart that it was a body double named Teresa Barnwell who came out of that building.  (Barnwell is an actress who has been portraying Hillary for over 20 years.)

The reason I think it was not Hillary is because there wasn’t a single member of her entourage close to her – in case she seized again or stumbled – AND because they let her (with pneumonia, which is assumed to be contagious) get in a child’s face.  If Hillary was in fact contagious with BACTERIAL PNEUMONIA, that would be almost criminally negligent.  With me so far?

Hillary MAY have had pneumonia as her doctor said, but the type she had is ASPIRATION PNEUMONIA – and it is NOT contagious.  It happens when the throat muscles fail to function properly and foreign particles get into the lungs, causing fluids in the lungs and EXTENDING COUGHING FITS.  Another symptom of Parkinson’s.

Google it if you don’t believe me.  Also google TERESA BARNWELL HILLARY BODY DOUBLE…. I am NOT the only conspiracy theorist out there who believes this.  If you look at this Barnwell closely – her nose has a ‘hooked’ profile, her face is not as long as Hillary’s, and her face is wider than Hillary’s.  She is also shorter and about 30 pounds lighter… THIS IS THE WOMAN WHO EXITED CHELSEA CLINTON’S BUILDING AFTER 90 MINUTES.

Hillary has Parkinson’s…. and she’s had it for a number of years.  That is my belief and it’s not likely to change!

America also dodged a bullet when Hillary Clinton lost to Donald Trump. That is also my belief and it’s not likely to change - ever!