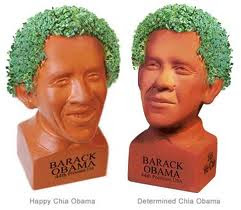 TO COMMEMORATE AND HONOR FOUR GREAT PRESIDENTS.....JOSEPH ENTERPRISES PRESENTS........... (tadaaaaaaaaaaaaaa) THE PROUD TO BE AN AMERICAN CHIA SERIES!

ARE YOU READY FOR THIS! ROFLMAO!

Offer Details: Order now and get your Proud to be American Chia for only $19.95 and just $7.95 S&H. Your package will include your choice of Chia Washington, Chia Lincoln, Chia Obama or Chia Liberty Pose Handmade Planter, with the convenient drip tray, Chia seed packet and instructions. And when you order more than one Proud to be American Chia we’ll waive the shipping and handling on your entire order.

GO TO THIS LINK AND LISTEN TO THE AD! THEY ARE SERIOUS!

MY THOUGHTS ON GAYS IN THE MILITARY

First of all, I want to say that sexual orientation does not matter to me. People can be whoever they are with whomever they choose. My sexuality is MY business and yours is YOURS. Don't flaunt it in my face, no matter how you swing.... keep it in the bedroom and we will get along just fine.

EVERYONE in the military should follow don't ask - don't tell. It's NOT relevant to job performance, and what a soldier does in private is hisher business and no one elses.

Having said that, I see letting gays serve openly NOT as a morale problem, NOT a command problem but a legal problem...... and I use 'legal' in the sense that.... the chain of command will have to walk on eggshells to avoid discrimination suits, which WILL be detrimental to everything military. The first time an openly gay man slips into his little black dress and fishnet stockings and hoop earrings and heads to the base NCO/OC and gets the living shit beat out of him along the way..... let the lawyers gather like vultures, because there WILL be lawsuit after lawsuit... EERs/OERs that aren't perfect will said to be such because the military member is gay. And that's only two examples. It's a Pandora's Box that needs to remain closed.

Male or female - keep your junk to yourself.... I welcome any patriot who wants to serve this country and I will be the first to thank him/her for that service.... but sex belongs in the bedroom, NOT on the PT field or on the firing line. Just saying...
at December 10, 2010 2 comments:

NARCISSISTIC PERSONALITY DISORDER HAS BEEN ELIMINATED AS A PSYCHIATRIC DISORDER - just wondering if this was done by a presidential executive order?

IT'S GOOD TO BE CHARLIE! 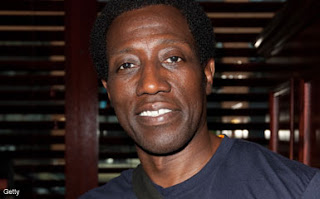 He has finally given up on appealing his tax evasion conviction, and earlier today (December 9) Wesley Snipes went to jail.

The “Blade” actor turned himself in to McKean Federal Correctional Institution in Lewis Run, Pennsylvania where he’ll spend the next three years.

Back in 2008, Snipes was found guilty of three misdemeanor counts of willful failure to file income taxes, and after a period of time in McKean, he’ll transfer to a minimum security facility.

Charlie Wrangle goes back to work 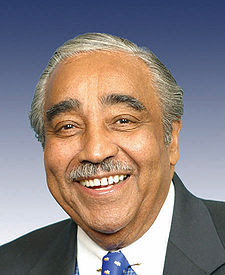 Ever notice that those who endorse high taxes and those who actually pay them aren’t the same people? Consider the curious case of Ways and Means Chairman Charlie Rangel, who is leading the charge for a new 5.4-percentage point income tax surcharge and recently called it “the moral thing to do.” About his own tax liability he seems less, well, fervent.

Exhibit A concerns a rental property Mr. Rangel purchased in 1987 at the Punta Cana Yacht Club in the Dominican Republic. The rental income from that property ought to be substantial since it is a luxury beach-front villa and is more often than not rented out. But when the National Legal and Policy Center looked at Mr. Rangel’s House financial disclosure forms in August, it noted that his reported income looked suspiciously low. In 2004 and 2005, he reported no more than $5,000, and in 2006 and 2007 no income at all from the property.

The Congressman initially denied there was any unreported income. But reporters quickly showed that the villa is among the most desirable at Punta Cana and that it rents for $500 a night in the low season, and as much as $1,100 a night in peak season. Last year it was fully booked between December 15 and April 15.

Mr. Rangel soon admitted having failed to report rental income of $75,000 over the years. First he blamed his wife for the oversight because he said she was supposed to be managing the property. Then he blamed the language barrier. “Every time I thought I was getting somewhere, they’d start speaking Spanish,” Mr. Rangel explained.

Despite getting the support of the Queens congressional delegation, the U.S. House voted 333 to 79 last Thursday to censure U.S. Rep. Charles Rangel (D-Astoria) for improperly soliciting donations, improperly using a rent-stabilized apartment and tax evasion.
at December 10, 2010 No comments:

METHINKS I SHALL RUN FOR CONGRESS!

INTERESTING NUMBERS HERE.... NO WONDER GETTING RE-ELECTED IS THE #1 PRIORITY!

Effective January 1, 2001, the annual salary of the president of the United States was increased to $400,000 per year, including a $50,000 expense allowance. [ummmm do you think maybe Obama has exceeded his expense allowance?]

Former presidents are offered a taxable lifetime pension equal to the annual rate of basic pay for the heads of executive branch departments, like the Cabinet Secretaries. This amount is set annually by Congress and is currently (in 2009) $193,400 per year. The pension starts the minute the president officially leaves office at noon on Inauguration Day. Widows of former presidents are provided with a $20,000 annual lifetime pension and mailing privileges, unless they choose to waive their right to the pension.

Leaders of the House and Senate are paid a higher salary than rank-and-file members.

A cost-of-living-adjustment (COLA) increase takes effect annually unless Congress votes to not accept it. [yeah, right!]


Members of Congress receive retirement and health benefits under the same plans available to other federal employees. They become vested after five years of full participation.


Members of Congress are not eligible for a pension until they reach the age of 50, but only if they've completed 20 years of service. Members are eligible at any age after completing 25 years of service or after they reach the age of 62. Please also note that Members of Congress have to serve at least 5 years to even receive a pension.
WOULDN'T THAT BE NICE - 5 YEARS AND A FULL PENSION! YUP! THINK I'M GONNA RUN!
at December 10, 2010 No comments:

THESE RINO'S ARE NEXT! LET THE 2012 CAMPAIGN BEGIN!

To contact any of these (as a constituent) pick any city in their state and get a zip code for it at this link: (make up a street)
http://zipcodes.addresses.com/results.php?ReportType=42&qi=0&qk=100&qs=MS


Sen. George Voinovich (retiring R, Ohio) – why bother with this one

Sen. Bob Bennett (defeated R, Utah) or with this one


IT'S TIME TO TELL THESE RINO'S THAT WE HAVE ONLY JUST BEGUN TAKING BACK AMERICA - IT'S ONLY BEEN 28 DAYS AND ALREADY THEY FORGET!
at November 30, 2010 1 comment:

It looks like George Soros will be the target of investigations on his role as a behind the scenes funder. From the current issue of Business Week magazine's cover story on Tom Donohue, head of the US Chamber of Commerce (titled, " Tom Donohue: Obama's Tormenter") comes this snippet:

Donohue announced that the Chamber had been digging into the funding sources of anti-globalization groups that might try to thwart their efforts overseas. "We found that 50 or 60 percent of their money comes from the same person," Donohue said dramatically. He wasn't ready to name names just yet. Instead, he acted like a man with a hand grenade in his pocket who couldn't wait to hurl it. "It's going to be a story," the chamber leader promised. The people sitting around the table seemed baffled. (Later, when asked if he was referring to George Soros, Donohue laughed and said, "That's a pretty good guess.")


I would surmise that the Chamber will be releasing a report soon with their information about George Soros.
at November 29, 2010 No comments:

GAYS IN THE MILITARY? SURE THING....

Der Spiegel reports that the (Wikileak) leaked documents presumably came from the same source - Private First Class Bradley Manning who was upset after a bad breakup with his boyfriend.
at November 29, 2010 No comments:

NARCISSISTIC PERSONALITY DISORDER (ok - I'm probably getting over the top here but this is fascinating!) anyone recognize any of these characteristics

Why not have a 'FLY LIST'... if I were a flier, especially a frequent one (I'm neither).... I would not mind at all applying for 'fly list' status by having a thorough background check (for a fee, of course), obtaining a 'FLIER ID' with my eye scan encrypted in it. Then..... I would be able to arrive at the airport, insert my ID card, lean in to a machine that would scan my eye for a match and then shoot out a pass for me and my bags..... and be on my way.

Renewable periodically.... for a reasonable fee, of course. Success of such a plan would be dependent upon how badly passengers want to by-pass the hassle of the 'line up to be felt up' process.
at November 28, 2010 No comments:

KILL SOCIAL SECURITY WHILE WE CAN!

I’m gonna keep pounding on this…. Social Security is NOT a sacred cow! It was NEVER intended to be a person’s SOLE RETIREMENT INCOME. It was meant to be a SUPPLEMENT. It has to be eliminated! It’s the government’s way of equalizing everyone…. at the bottom of the income level! Consider this – and remember it and pass it along!


It is time for the government (i.e. the taxpayers) to stop enabling…. Those that CAN, DO…. Or do without! Those that CAN’T…. that’s why we have private charities, and that worked for years until LBJ destroyed the American family.


If you want to read something really funny, check out this link:
http://usa.usembassy.de/etexts/soc/ssbriefhistory.pdf