REPUBLICANS PANIC - WHAT A SURPRISE!

The Republican party is in a panic/meltdown over their fundraising and bank balance.  Now I wonder who's to blame for this?

The Republicans HAVE a 'presumed' nominee - Donald Trump has more than enough delegates to be nominated on the first ballot at the convention, which is a mere 27 days away.  Yet every day there's an article about various factions trying to undermine the vote and change the rules so they can nominate a different candidate.  That's problem #1.

Problem #2 is the lack of party support from members of Congress, including the Speaker of the House and the Senate Majority Leader, and several Republican governors who are in swing states.  Add to that, the 16 other Republican wannabes that Trump defeated.  Recall that they ALL signed a pledge to support the nominee.  Appears that wasn't worth the paper it was written on in most cases. (Some ARE supporting Trump but certainly not all 16).

Fast forward.  Hillary's campaign has raised over $296 million and is sitting on approximately $30 million (not including PAC money); Trump's has raised around $60 million and has about $2 million on hand.  Trump's PACs have negligible cash.

The party nominee is the primary fundraiser, with much of the money coming in being paid down to lower tier candidates.  Yup - they have reason to panic.

RNC Committee Chairman Reince Priebus has been very forthcoming, at least in public, about supporting Trump. It's time for Priebus to stand up and put his foot down with every single Republican candidate.  With the convention less than four weeks away, Priebus had best take control, and do it with vigor.


You have all been faking being Conservatives for years!!!  Time to fake your support for the candidate the VOTERS have chosen!

As a donor and a Trump supporter, I ask you - why in the world would I give money to the RNC when MEMBERS OF MY OWN PARTY ARE ATTACKING THE SOON-TO-BE OFFICIAL CANDIDATE FOR PRESIDENT!  Hell, why would TRUMP campaign with these people?  I continually block any calls from RNC.  As of right now, when I feel like sending money, it will be directly to Donald Trump or the North Carolina Republican Party.

THE FUNERAL OF CHRIS KYLE....AMERICAN SNIPER

Received this in an email from my sister-in-law..... whose husband is retired SF...

U.S. NAVY SEALS REQUEST THAT YOU PASS THIS ON!!!

Here is a description of his funeral, definitely worth reading:

This is apparently from a wife of one of the Navy Seals in attendance...it makes interesting and disturbing, but hardly surprising, reading.

Chris Kyle became the US armed services number #1 sniper of all time. Not something he was happy about, other than the fact that in so doing, he saved a lot of lives.

Three years ago, his wife Taya asked him to leave the SEAL teams because he had a huge bounty on his head by Al Qaeda. He did and wrote the book "The American Sniper" and 100%of the proceeds from the book went to two of the SEAL families who had lost their sons in Iraq.

That was the kind of guy Chris was. He formed a company in Dallas to train military, police and I think firemen, how to protect themselves in difficult situations. He also formed a foundation to work with military people suffering from PTSD. Chris was a giver not a taker. He, along with a friend and neighbor, Chad Littlefield, were murdered trying to help a young man that had served six months in Iraq and claimed to have PTSD.

Now I need to tell you about all of the blessings.

Southwest Airlines flew in any SEAL and their family from any airport to the funeral ... free of charge. The employees donated buddy passes and one lady worked for four days without much of a break to see that it happened. Volunteers were at both airports in Dallas to drive them to the hotel.

The Marriott Hotel reduced their rates to $45 a night and cleared the hotel for only SEAL's and family.

The Midlothian, TX Police Department paid the $45 a night for each room. I would guess there were about 200 people staying at the hotel, 100 of them were SEALS.

Two large buses were chartered (an unknown donor paid the bill) to transport people to the different events and they also had a few rental cars (donated).
The police and secret service were on duty 24 hours during the stay at our hotel.

At the Kyle house, the Texas DPS parked a large motor home in front to block the view from reporters. It remained there the entire five days for the SEALS to meet in and so they could use the restroom there instead of the bathroom in the house.

Taya, their two small children and both sets of parents were staying in the home. Only a hand full of SEALS went into the home as they had different duties and meetings were held sometimes on an hourly basis.

It was a huge coordination of many different events and security. Derek was assigned to be a Pall Bearer, to escort Chris' body when it was transferred from the Midlothian Funeral Home to the Arlington Funeral Home, and to be with Taya. A tough job. Taya seldom came out of her bedroom. The house was full with people from the church and other family members that would come each day to help. I spent one morning in a bedroom with Chris' mom and the next morning with Chad Littlefield's parents (the other man murdered with Chris). A tough job.

George W. Bush and his wife Laura, met and talked to everyone on the Seal Team one on one. They went behind closed doors with Taya for quite a while. They had prayer with us all. You can tell when people were sincere and caring.

Nolan Ryan sent his cooking team, a huge grill and lots of steaks, chicken and hamburgers. They set up in the front yard and fed people all day long including the 200 SEALS and their families.

The next day a local BBQ restaurant set up a buffet in front of the house and fed all once again.

Food was plentiful and all were taken care of. The family's church kept those inside the house well fed.

Jerry Jones, the man everyone loves to hate, was a rock star. His wife and he were just making sure everyone was taken care of....Class...  He donated the use of Cowboy Stadium for the services because so many wanted to attend. The charter buses transported us to the stadium on Monday at 10:30 am. Every car, bus, motorcycle was searched with bomb dogs and police. I am not sure if kooks were making threats trying to make a name for themselves or if so any SEALS in one place was a security risk, I don't know. We willingly obliged. No purses went into the stadium!

We were taken to The Legends room high up and a large buffet was available. That was for about 300 people. We were growing. A Medal of Honor recipient was there, lots of secret service and police and Sarah Palin and her husband. She looked nice, this was a very normal military service.  The service started at 1:00 pm and when we were escorted onto the field I was shocked. We heard that about 10,000 people had come to attend also. They were seated in the stadium seats behind us.

It was a beautiful and emotional service. The Bagpipe and drum corps were wonderful and the Texas A&M men's choir stood through the entire service and sang right at the end. We were all in tears.

The next day was the 200-mile procession from Midlothian, TX to Austin for burial. It was a cold, drizzly, windy day, but the people were out.

We had dozens of police motorcycle riders, freedom riders, five chartered buses and lots of cars . You had to have a pass to be in the procession and still it was huge.

Two helicopters circled the procession with snipers sitting out the side door for protection.  It was the longest funeral procession ever in the state of Texas.  People were everywhere.  The entire route was shut down ahead of us, the people were lined up on the side of the road the entire way.

Firemen were down on one knee, police officers were holding their hats over their hearts, children waving flags, veterans saluting as we went by.

Every bridge had fire trucks with large flags displayed from their tall ladders, people all along the entire 200 miles were standing in the cold weather.  It was so heart-warming. Taya rode in the hearse with Chris' body so Derek rode the route with us. I was so grateful to have that time with him. The service was at Texas National Cemetery. Very few are buried there and you have to apply to get in. It is like people from the Civil War, Medal of Honor winners, a few from the Alamo and all the historical people of Texas . It was a nice service and the Freedom Riders surrounded the outside of the entire cemetery to keep the crazy church people from Kansas that protest at military funerals away from us.

Each SEAL put his Trident (metal SEAL badge) on the top of Chris' casket, one at a time. A lot hit it in with one blow. Derek was the only one to take four taps to put his in and it was almost like he was caressing it as he did it.

After the service Governor Rick Perry and his wife, Anita , invited us to the governor's mansion. She stood at the door, greeted each of us individually, and gave each of the SEALS a coin of Texas. She was a sincere, compassionate, and gracious hostess. We were able to tour the ground floor and then went into the garden for beverages and BBQ. So many of the Seal team guys said that after they get out they are moving to Texas. They remarked that they had never felt so much love and hospitality. The charter buses then took the guys to the airport to catch their returning flights. Derek just now called and after a 20 hours flight he is back in his spot, in a dangerous land on the other side of the world, protecting America.

We just wanted to share with you, the events of a quite emotional, but blessed week."

To this day, no one in the White House has ever acknowledged Chris Kyle; his service, his death, his duty, his generosity, his caring, or his life.

However, the President can call a sports person and congratulate him on his bravery for announcing to the world that he is gay.

He can say on national television that someone, a man who has committed a crime and was shot by police in the line of duty, would have made him a good son.

The SEALS  have asked that you please, keep this moving if you think Chris Kyle would have made a good son.

Is there a reason Texas means "FRIENDLY"  ??

HILLARY CLINTON..... WILL FIGHT FOR THE MIDDLE CLASS WEARING A $12,000 TENT-COAT

I'm just wondering how someone with NO CLASS can fight for the middle class while being sued by The Kirby Company for patent infringement. 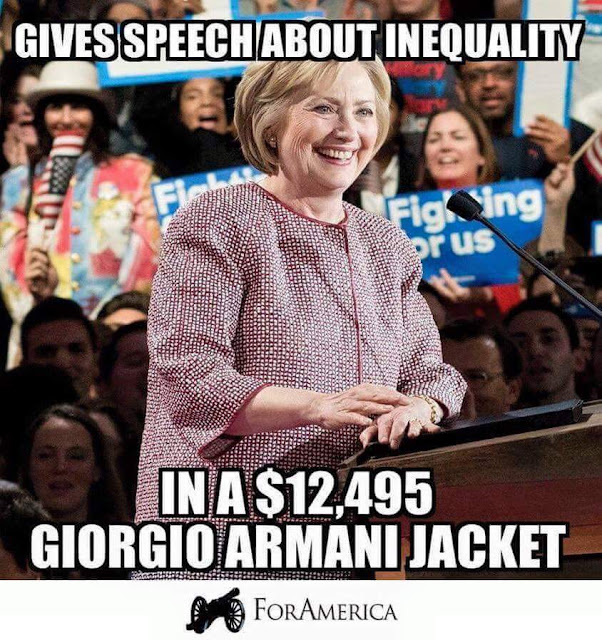 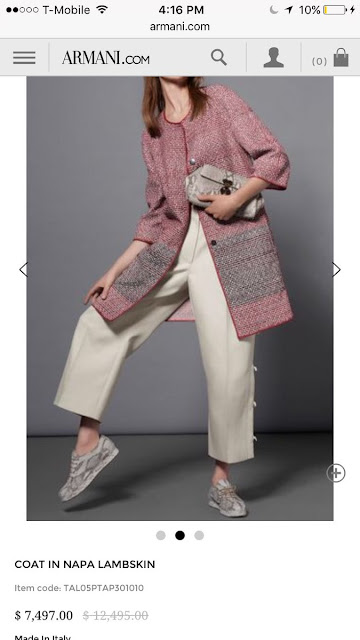 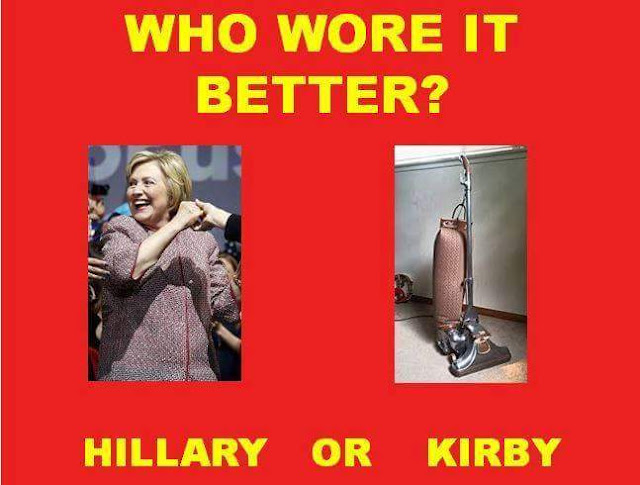 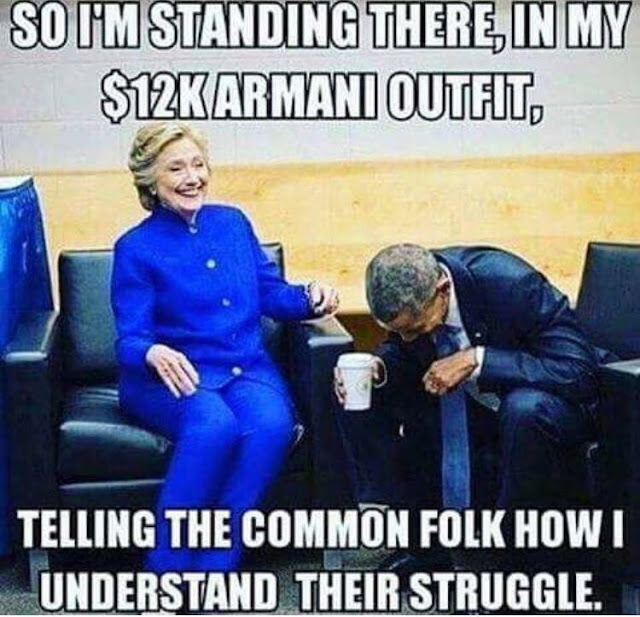 Email ThisBlogThis!Share to TwitterShare to FacebookShare to Pinterest
Labels: Clinton vs Kirby 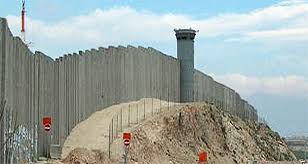 Problem solved?  I think so.

To keep the problem from recurring..... build the wall.