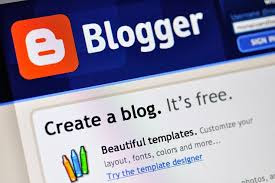 I have three separate blogs on Google.  Have had 'em for almost 7 years, except for about 18 months when I moved one to another service because Google was censoring what I wrote.  When the excrement hit the oscillating device over that, Google quickly rethought their censorship and dropped it altogether.  I had already paid for a year with another provider so I stayed, mainly to see if Google would do another about-face.

Recently, Google, in their infinite wisdom, changed their layout for blogging.  Now, rather than signing in and having all three of my blogs at the tip of my cursor, I have the one that has the most recent post covering the screen.  It takes additional clicking/waiting to get to the blog I want, and additional click/waiting TO SEE what I want to see.

Google is like a government bureaucracy - they have people working for them RE-INVENTING SHIT merely to justify their own existence.

Blogger/blogspot was an excellent, well-designed product.  WAS - past tense.  Why can't they just let well enough the hell ALONE!

They have made a good thing bad... time for me to move on....AGAIN.