I'm having a real problem typing this..... I cannot stop my hands from clenching and unclenching.....


In an unprecedented move, the Pentagon is trying to transfer convicted national security leaker Pvt. Chelsea Manning to a civilian prison so she can get treatment for her gender disorder, defense officials said.

Manning, formerly named Bradley, was convicted of sending classified documents to anti-secrecy website WikiLeaks. The soldier has asked for hormone therapy and to be able to live as a woman.

Some officials have said privately that keeping the soldier in a military prison and unable to have treatment could amount to cruel and unusual punishment. [Ed. Note:  OMFG!]

Last November, a military doctor there had approved a treatment plan [for Manning], including hormone therapy, but it was sent higher up the chain of command for consideration, according to a complaint filed by Manning in March over the delay in getting treatment.

OK – let me get this straight.  Bradley Manning, a convicted TRAITOR, COMPLAINS about a delay in his gender reassignment surgery [He's now known as Chelsea Manning] while in prison in Ft. Leavenworth - and the military system jumps through their ass to get this process started - BY TRANSFERRING 'IT' TO A CIVILIAN HOSPITAL.  And guess who will pay for all this!  (if you said taxpayers, you win a balloon!)

AS THIS KRAP IS HAPPENING, THIS SAME GOVERNMENT MEDICAL CARE SYSTEM (The VA) IS METHODICALLY MOVING OUR WOUNDED AND/OR ILL VETERANS TO SECRET WAITING LISTS TO KEEP THEM FROM MAKING THE ‘NUMBERS SERVED' LOOK BAD’‼‼ 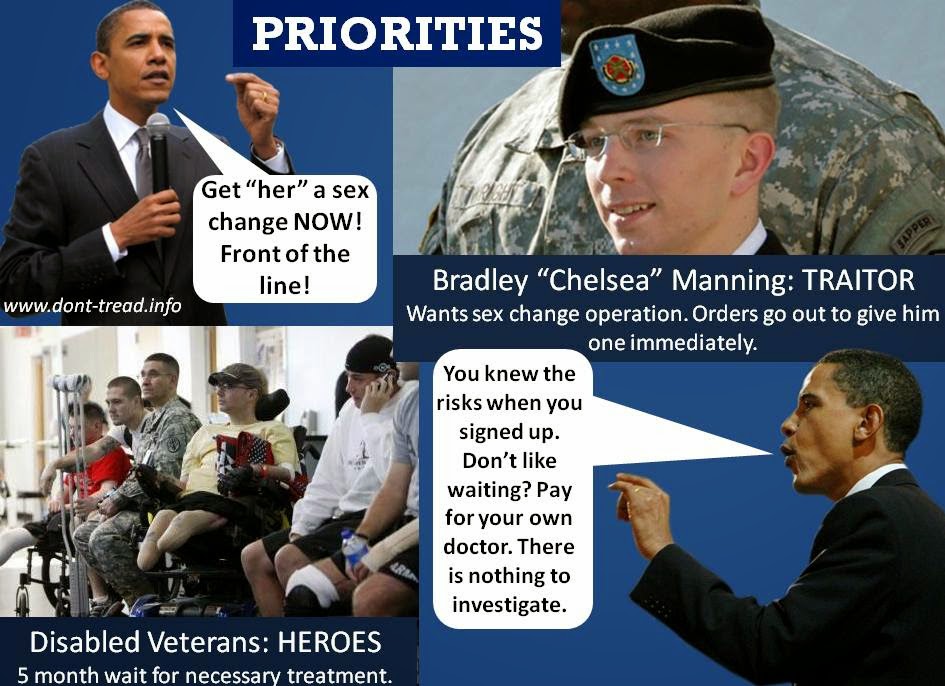 Harken back to March 10, 2009.... In case you missed this.... the newly inaugurated President Barack Obama's newly named head of the VA - Gen. Eric Shinseki was quoted by CNN..... 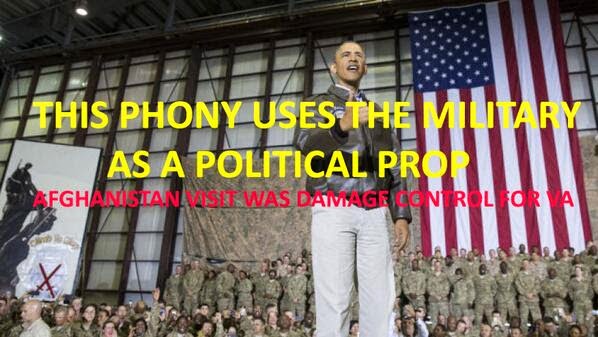 Do NOT be fooled by Obama's surprise trip to visit the troops in Afghan this past (Memorial Day) weekend.  He and Michelle Obama couldn't give less of a shit WHAT happens to American fighting men and women.  They are merely political PROPS for photo OPS..... believe it! 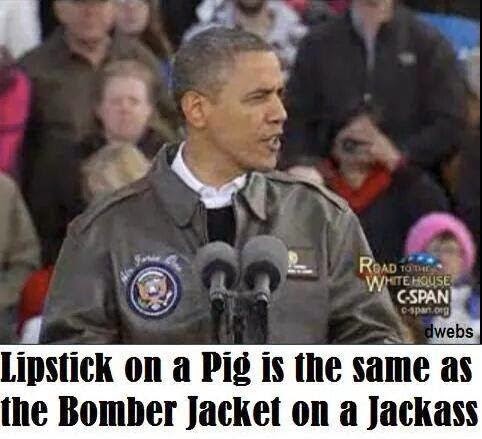 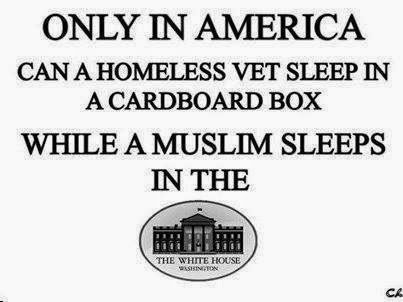 Email ThisBlogThis!Share to TwitterShare to FacebookShare to Pinterest
Labels: VA and political correctness

From The Daily Caller...


As a freshman at Columbia University in 1970, future Attorney General Eric Holder participated in a five-day occupation of an abandoned Naval Reserve Officer Training Corps (ROTC) headquarters with a group of black students later described by the university’s Black Students’ Organization as “armed,” ….

The Democrat-controlled Senate approved this appointment in 2009.... 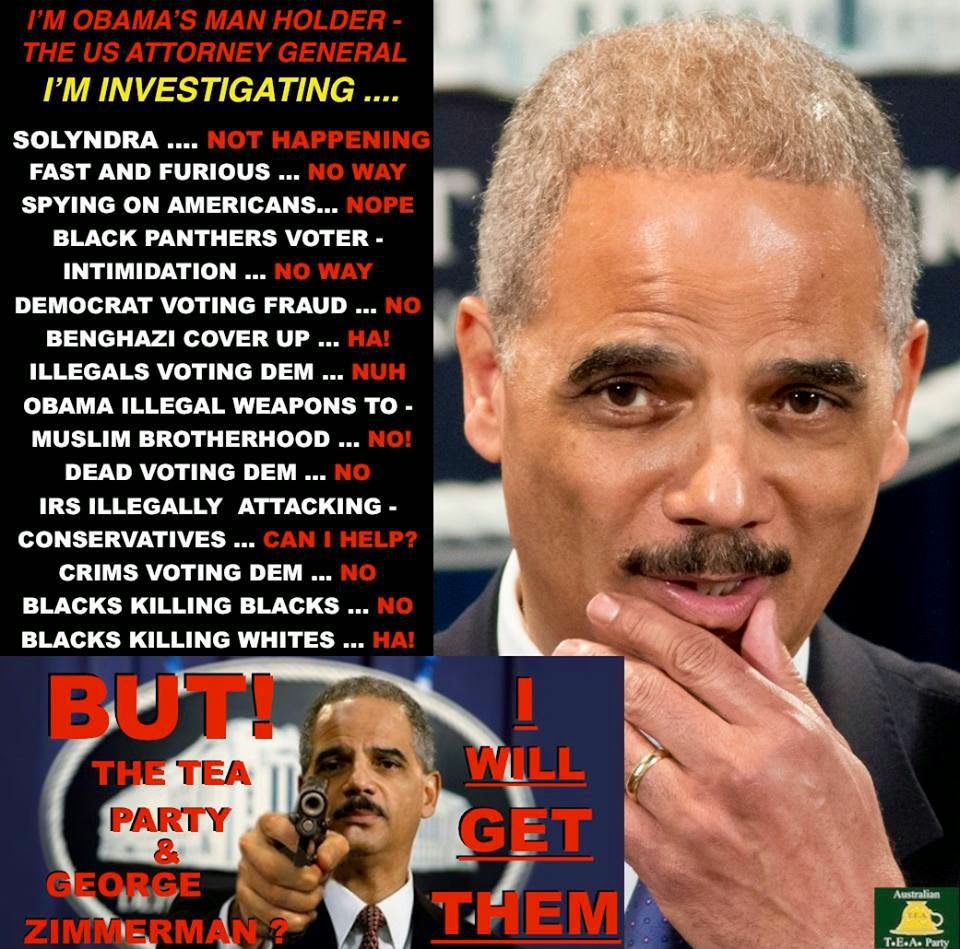 HOW TO DESTROY RUSSIA

THE QUICKEST WAY TO DESTROY RUSSIA WITHOUT FIRING A SHOT:

This plan is proven and has been working in the U. S. since 2009 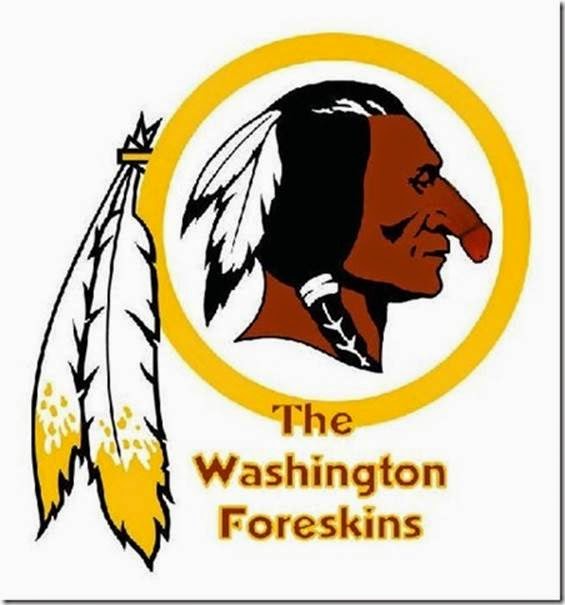 The following is from an email that claims to be in response to the Clarence Page Oped linked above...... I sooooo wish I had written this myself!

I always love your articles and I generally agree with them. I would suggest, as in an email I received, that Washington change the name of their football team to the "Foreskins" to better represent their community, paying tribute to the dick heads in Congress.

Here is some other political correctness to consider:

I agree with our Native American population. I am highly insulted by the racially charged name of the Washington Redskins.  One might argue that to name a professional football team after Native Americans would exalt them as fine warriors, but nay, nay.  We must be careful not to offend, and in the spirit of political correctness and courtesy, we must move forward.

Let's ditch the Kansas City Chiefs, the Atlanta Braves and the Cleveland Indians. If your shorts are in a wad because of the reference the name Redskins makes to skin color, then we need to get rid of the Cleveland Browns.

The Carolina Panthers obviously were named to keep the memory of militant Blacks from the 60's alive. Gone. It's offensive to us white folk.

The New York Yankees offend the Southern population. Do you see a team named for the  Confederacy?  No!  There is no room for any reference to that tragic war that cost this country so many young men’s’ lives.

I am also offended by the blatant references to the Catholic religion among our sports team names. Totally inappropriate to have the New Orleans Saints, the Los Angeles Angels or the San Diego Padres.

Then there are the team names that glorify criminals who raped and pillaged. We are talking about the horrible Oakland Raiders, the Minnesota Vikings, the Tampa Bay Buccaneers and the Pittsburgh Pirates!

The New York Giants and the San Francisco Giants promote obesity, a growing childhood epidemic. Wrong message to our children.

The Cincinnati Reds promote downers/barbiturates. Wrong message to our children.

The Milwaukee Brewers---well that goes without saying. Wrong message to our children.

So, there you go. We need to support any legislation that comes out to rectify this travesty, because the government will likely become involved with this issue, as they should. Just the kind of thing the do-nothing Congress loves.

As a diehard Oregon State fan, my wife and I, with all of this in mind, believe it might also make some sense to change the name of the Oregon State women's athletic teams to something other than "the  Beavers".

Keep those cards and letters coming.

So I don't have any 'apps'.  That makes me very curious about what I'm missing.... I keep seeing this commercial where there's been a home disaster - flooding.  And after looking at the damage on an iPad, the family clicks on their ServPro app and suddenly help is on the way!

Is there ANYONE out there with the ServPro app on their phone or iPad?  If so.... please tell me why!

Email ThisBlogThis!Share to TwitterShare to FacebookShare to Pinterest
Labels: ServPro