I thought I was a smart voter.... but I made a HUGE mistake... I voted for a man I didn't know - but I knew his wife and thought she rocked.

But the backstory is..... our little town had a great SMALL hospital built in in the mid-40's... with an ER that was awesome with little or no waiting, vent rooms, an operatory for procedures like colonoscopy or endoscopy, and a physical therapy department second to none.  Vidant (Greenville/ East Carolina Medical Center) took over the hospital two years ago, under a contract to run and maintain the facility.  Long story short.... Vidant raped the hospital, took out all the equipment, and failed to run/maintain the hospital as they contracted to do.

Seems that if the property is NOT used as a hospital, ownership reverts to the town (from the original deed).  Now my little town is divided..... Vidant has offered to build and staff an URGENT CARE CENTER in the town.... but.... that facility will NOT have an emergency room and WILL NOT accept patients with life threatening problems..... an ER is REQUIRED to take emergencies.... an Urgent Care.... well - you better have cash or plastic.

The county is VERY RURAL and patients have come from 40 miles away to this little hospital for EMERGENCY care... and then helicoptered to Greenville (Vidant).... but if I were to be in a head-on car collision in front of the new Urgent Care.... they would NOT treat me - I would have to be carried by ambulance to the nearest ER - which is 45 minutes away.

On June 30 of this year, Vidant - breaking their contract - closed the hospital. Since then, the town has been fighting like a pit bull to reopen the facility.  The town is suing Vidant for millions for replacement of all the equipment they rode off with.... and the town is applying for EVERY POSSIBLE DIME available to help re-open the hospital.

Tuesday morning, I voted early..... and I voted for Frankie Waters, who is running for County Commissioner.  I voted for him because of his wife.

Tuesday afternoon, I learned that Waters has said he will NEVER CAST A VOTE TO PROVIDE ANY FUNDING FOR MY TOWN TO RE-OPEN THE HOSPITAL.

80% of Hispanics who vote VOTE FOR DEMOCRATS… period.  This is an historical fact and it won’t change.  The minute Obama grants the illegals amnesty, that is the minute the Democrat party becomes a permanent majority.  Believe it!

The Republicans piss and moan that they need ‘cheap labor’….in an environment where currently only 62.8% of people ABLE to work actually have a job!  I can fix the labor problems in this country with one word:  WORKFARE!  When the ‘work requirement for government assistance’ was passed by the Republicans under Clinton – PEOPLE WENT TO WORK!

Additionally, CHEAP LABOR is rapidly becoming a thing of the past, as the Democrats continue to press for a higher minimum wage.  As the wages go up, employers can either cut profits or reduce their workforce.  Not a problem for the big guys but a HUGE problem for the family business that employs 10-15 people.

How will you deal with THAT, Republicans?  There are also more and more regulations punishing EMPLOYERS for hiring illegals.  Oh wait…. They will be LEGAL and must be paid minimum wage, covered by an insurance plan, yada, yada, yada.  Uh, oh.  So much for ‘cheap’ labor, folks.

The government will continue the onslaught against free enterprise until everyone is forced onto the government tit….

AND THE DEMOCRATS’ RACE TO SOCIALISM WILL CROSS THE FINISH LINE!

WHY IS OBAMA THROWING HIS OWN PARTY UNDER THE BUS???

The news media are publishing story after story about this years Congressional Democrats who are up for election/re-election running away from Obama and his policies.  Yet as the November 4 election gets closer.... it appears Barack is doing all he can to sabotage their chances of maintaining the Senate.

or most recently telling Al Sharpton in an interview that 'people have ID and can vote'....are making it harder and harder for the Democrat candidates to put some distance between then and this failed president. [Ed. Note:  this comment also makes it harder for Dems to say requiring ID is racist!  LMAO]

Why?  Why would he do this?

Any honest American who has been paying attention for six years KNOWS that everything Obama has touched has turned to shit.

If I were a Democrat I'd be making tracks AWAY from Obama, too!

I'll tell you why I think Obama is torpedoing his own party.  The answer is 'the Gingrich Revolution!  Clinton got in big trouble with the economy in the first two years of his first term.  In 1994 the Republicans, led by Newt, hit the campaign trail with the Contract With America.... and they had a massive takeover of Congress.  Under the Republicans, government spending decreased, job creation in the private sector soared, and income for working Americans rose, and partly because of the work requirement to receive public assistance - unemployment fell like a rock.

AND BILL CLINTON GOT ALL THE CREDIT BECAUSE HE WAS THE PRESIDENT!!!  Today, the Dems tout his presidency for all the things the REPUBLICANS made happen.

Barack's presidency is in the toilet and his legacy may be written on toilet paper unless something happens in the next two years to turn this nation around.

Could it be..... could it HAPPEN again with the Republicans controlling both houses of Congress?  COULD IT BE THAT OBAMA WANTS THE REPUBLICANS TO WIN SO SAVE HIS PRESIDENCY?

BINGO!  There would be two scenarios if the Republicans win the Senate and hold the House...... a repeat of the Gingrich revolution where Americans go back to work....... AND OBAMA GETS THE KUDOS..... or..... Obama's presidency gets the big flush.... FOR WHICH HE CAN BLAME THE REPUBLICANS 100%.....  In either scenario, Obama will be treated much more kindly by the historians than he would if history were written today.....

That's my theory and I'm sticking to it.

As an aside - even the magic of the Republicans cannot undo the damage from Operation Gunrunner, the slaughter of Americans in Benghazi, and the IRS scandal!

WALMART vs. THE UNITED STATES GOVERNMENT

Wal-Mart employs 1.6 million people, is the world's largest private employer
Wal-Mart is the largest company in the history of the world.

90% of all Americans live within fifteen miles of a Wal-Mart. (I’m 40 miles from one! UGH)

PERHAPS WE SHOULD HIRE THE PEOPLE WHO RUN WAL-MART TO RUN OUR ECONOMY!

Email ThisBlogThis!Share to TwitterShare to FacebookShare to Pinterest
Labels: Walmart, Walmart vs. government

Seems Rick Scott (R) was late to the debate stage because of Charlie Crist (R,D,I) and a fan. (He actually had TWO!)

Scott denies that's why he was late - said he didn't KNOW Crist was already on stage.... fans and all! 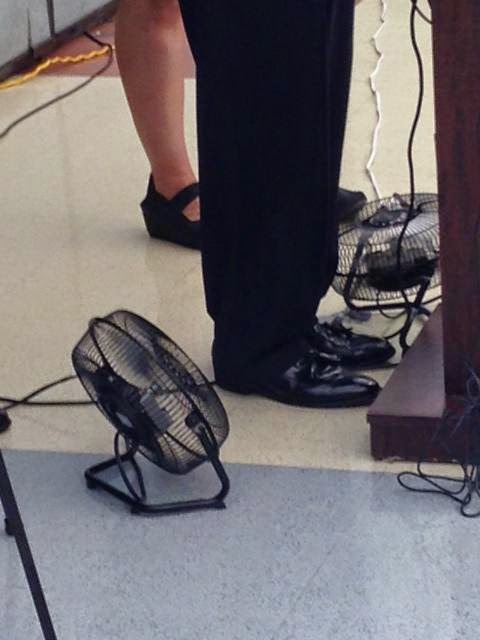 Seems Charlie may have had.....SCHWEDDY BALLS????

Email ThisBlogThis!Share to TwitterShare to FacebookShare to Pinterest
Labels: clowns in government, Send in the clowns

MY COLD THOUGHTS ON EBOLA…..

Here is a quote from www.infoplease.com about the spread of Ebola:

The viruses that cause Ebola and Marburg are similar, infecting both monkeys and people. The outbreaks of these diseases are often self-contained, however, because they kill their hosts so quickly that they rapidly run out of people to infect.

THAT should be a real comfort to people who suddenly realize they have been in contact/in the vicinity with someone infected!

Ed. Note:  Marburg, like Ebola, is viral disease that manifests by sudden onset, fever, headache, generalized myalgia, backache, conjunctivitis, and severe prostration, soon followed by various hemorrhagic symptoms, which result in focal inflammatory reaction and necrosis (death of body tissue).  The CDC said there are several ways Ebola can spread to other people: Touching the blood or body fluids of a person who is sick with or has died from Ebola, including but not limited to urine, saliva, feces, vomit and semen.

An airline flight… closed compartment, recirculated air, with someone infected… he might sneeze or cough... or maybe he uses the bathroom…. Shake, shake…. Flush…. You follow him into the head…. Flush…. CONTACT

A dinner out… same scenario… someone infected in the restaurant …. He uses the bathroom…. Shake, shake…. Flush…. You follow him into the head…. Flush…. CONTACT…  don’t touch your face before washing your hands

On a different note, Obama is sending 4000 military to Africa to build temporary hospitals… for Ebola patients.  HELLO!  Soldiers are trained to kill enemies THEY CAN SEE!  Not a virus they can’t see!  Exposure in numerous ways…. They come home…. Kiss wives, children…. CONTACT

Thomas Frieden, Director of the CDC, says Ebola is NOT spread by casual contact… on the one hand…. On the other hand, he tells anyone travelling to Africa…. ‘AVOID PUBLIC TRANSPORTATION’…. Can you say DICHOTOMY?  This man is an idiot!  Confidence is low!

An argument for cancelling all flights to and from nations with Ebola outbreak….. On the one hand, how MEAN to not allow them to come here in hopes for a cure……….. On the other hand, liberals scream that ‘we can’t fight Ebola THERE…. How can we get aid workers there?  Who would GO there if they can’t be assured of coming home?’

ANYONE EVER HEAR OF CHARTERED FLIGHTS‼‼‼!  We managed to bring an infected doctor and nurse home on private planes!

COMMERCIAL FLIGHTS SHOULD BE BANNED TO AND FROM COUNTRIES WITH EBOLA OUTBREAKS!

The United States has had one DEATH from Ebola (Duncan)…. And now we have a nurse with the disease…. a nurse TRAINED TO DEAL WITH EBOLA‼‼  Who had contact WITH Duncan…   I hope she didn’t go home and kiss her husband goodnight… or God forbid, HER CHILDREN‼‼

I’m sorry to say this… but it’s a GOOD thing that Duncan died…. if he had survived, just IMAGINE the people from Africa…. with $$$$ and Ebola…. how many would be headed our way‼‼  Who could BLAME them?  Not me! They want to survive!

PRESIDENT OBAMA…. WHY ARE YOU SENDING 4000 MILITARY TROOPS TO AFRICA TO FIGHT EBOLA!  YOU ARE SUCH A PIECE OF SHIT AND YOUR HATRED FOR THE MILITARY IS BEYOND OBVIOUS!  SEND THEM TO FIGHT ISIS, YOU PUSILLANIMOUS COMMUNITY ORGANIZER!‼!

CLOSE OUR SOUTHERN BORDER, CANCEL AIRLINE FLIGHTS TO AND FROM THESE AFRICAN COUNTRIES – AND STOP THIS OUTBREAK OF EBOLA BEFORE IT CONSUMES THE UNITED STATES OF AMERICA!


Remember……  The outbreak of this disease is often self-contained because IT KILLS its HOST SO QUICKLY THAT IT RUNS OUT OF PEOPLE TO INFECT!
at October 12, 2014 3 comments:

DOES IT 'PAY' TO BE SENATOR KAY HAGAN??

The North Carolina Republican Party filed a complaint against Senator Kay Hagan after it was revealed that a company co-owned by her husband received $390,000 in taxpayer grants and tax credits as a result of her vote for President Obama's 'stimulus' law.

Hagan continues to stonewall the press and - more importantly - the people of North Carolina. That's why I [Claude E. Pope, Jr.] have filed this formal complaint. It will begin an investigation by the Senate Ethics Committee, and they will determine whether a multi-millionaire like Senator Hagan used the influence of her high office to enrich her family.