JOE BIDEN HAS BEEN SELECTED PRESIDENT OF THE UNITED STATES.....

BOMBSHELL: The 2020 election took place under a Trump-declared “National Emergency”

From the Real Natural News: This is a HOLY SH1T moment…..IF this is true and it appears to be completely legitimate folks, the Deep State and dumocrats are in serious trouble!

Excerpts: This story begins with the little-known executive order signed into existence on September 12, 2018, by President Donald J. Trump. The orders, available at Whitehouse.gov, are entitled:

Executive Order on Imposing Certain Sanctions in the Event of Foreign Interference in a United States Election   FOREIGN POLICY  Sep 12, 2018

In these executive orders, which almost no one has covered since the day they were signed, President Trump declares a national emergency. That emergency is still in play to this day, and the 2020 election was conducted under this state of emergency, which is a crucial point to understand what’s coming next.

In the EO, the President also states that people and organizations located, in part, outside the United States are known to be able to, 'interfere in or undermine public confidence in United States elections, including through the unauthorized accessing of election and campaign infrastructure or the covert distribution of propaganda and disinformation.'

The EO further states that this foreign interference in U.S. elections, 'constitutes an unusual and extraordinary threat to the national security and foreign policy of the United States.'

Why is this relevant to anything we’re seeing right now with the massive election fraud carried out by the Democrats and the deep state? Because Dominion Voting Systems is a Canadian company. And Scytl is run out of Spain.

Scytl, by the way, is connected to George Soros and the Democrats, and according to TGP (see below)

Dominion is Canadian, Scytl is from Spain; both represent 'foreign interference' in US elections… with data routed through servers in Germany.

The voting machine company called Scytl, also widely used in US elections is located in Spain.

Days after it was revealed how 2020 US Elections were rigged by Canadian Crown Agent Dominion Voting Systems through a so-called 'glitch', now Great Game India has found involvement of another dubious foreign company in US Election meddling.

The votes cast by Americans were counted by a bankrupted Spanish company Scytl in Spain. Like Dominion Voting Systems, Scytl has a long history of election fraud in various nations including injecting backdoors in its election software.

The issue has prompted experts to question why the sensitive job of counting votes was outsourced to a foreign company? How could a bankrupted Spanish company count American votes in Spain? Due to such widespread fraud, the Chairman of the US Federal Election Commission Trey Trainor believes that the 2020 US Presidential Elections is illegitimate.

What people are missing in all this is that Trump’s 2018 executive order gives the DOJ the power to seize all assets of individuals and companies that were complicit in aiding or covering up this foreign interference in U.S. elections.

The National Emergency order specifically calls for seizure of all assets of entities that have, 'directly or indirectly engaged in, sponsored, concealed, or otherwise been complicit in foreign interference in a United States election.'

Trump’s EO further explains that asset seizures shall target people and entities which have:

In other words, the EO covers every person who has been corrupted or compromised by communist China. And that includes at least 80% of Democrat lawmakers, by our estimates, including Senators Feinstein and Schiff.

Every organization involved in the election theft and cover-up can now be seized by the US government.

But that’s not even the full extent of what’s demanded by this Executive Order.

In Section 8, the order explains that the term 'person' also means, 'a partnership, association, trust, joint venture, corporation, group, subgroup, or other organization.'

In other words, any media organization that assisted in covering up or assisting foreign interference in a U.S. election is specifically targeted by this Executive Order.

Further in the definitions section, the EO explains: …the term 'election infrastructure' means information and communications technology and systems used by or on behalf of the Federal Government or a State or local government in managing the election process, including voter registration databases, voting machines, voting tabulation equipment, and equipment for the secure transmission of election results.

That would include the Dominion voting systems as well as all other voting systems used in the recent election. Finally, the EO describes what it means by the term “foreign interference.” It means: (emphasis added)

This is exactly what Big Tech and the lying fake news media have done to America. More that merely a crime, it’s treason… and it fell right into the national emergency trap that Trump publicly announced in 2018 which now means all these corporations and organizations can have their assets seized literally overnight.

The article then proceeds to the Lou Dobbs/Sydney Powell interview, and then the Gateway Pundit article…(moving on)….

The raid appears to have targeted the CIA’s Frankfurt server farm operation. We also now have confirmation from WikiLeaks documents that the CIA used a data center in Frankfurt as a remote hacking base to rig US elections.

The leaks purportedly revealed that a top secret CIA unit used the German city of Frankfurt am Main as the starting point for numerous hacking attacks on Europe, China and the Middle East. German daily Süddeutsche Zeitung reported the building was known to be home to a vast network of intelligence personnel including CIA agents, NSA spies, military secret service personnel, Department of Homeland Security employees and Secret Service employees. It reported the Americans had also established a dense network of outposts and shell companies in Frankfurt.

It appears the CIA was using the same foreign data center to hack the US elections… and got caught. This is precisely why, as the Gateway Pundit reports, the CIA was kept completely out of the server raid operation that just took place in Germany. The raid was likely leveled against the CIA’s own server farm that ran the remote Dominion hacking operation the night of the election!

GOING DOWN: Big Tech, media giants, Democrat operatives and half the deep state!  It should be obvious to any informed person that everything Big Tech and the fake news media did to rig this election, then bury the Democrats’ massive vote fraud operations, was a covert, fraudulent deception and unlawful action… and it was all carried out on behalf of communist nations like China and globalist operations that are located outside the United States. It’s not merely that the voting system companies whose hardware and software systems rigged the election were located in Canada and Spain; we’re also told that part of the CIA’s rigging of the election in real-time involved data being offshored to servers located in Germany and possibly Serbia.

So there are at least three or four foreign countries involved in this election, and that doesn’t even include China and Venezuela, who both had other roles in running influence operations to rig the election outcome in favor of Biden. (Funding for Dominion was also provided, it is rumored, from wealthy socialists in Venezuela.)

Now, Team Trump is in the process of gathering irrefutable evidence of criminal collusion to carry out election interference, and the cover-up trails will lead directly to Big Tech (targeted censorship and collusion with China) and the fake news left-wing media (gaslighting propaganda campaign to cover up evidence of foreign collusion).

This means that in one fell swoop, President Donald J. Trump will be able to: Arrest and seize the assets of all the top Democrats and deep state traitors who attempted to steal the 2020 election, and seize all the Big Tech corporations and left-wing media propaganda outlets that were complicit in the conspiracy.

This could include seizing their domain names such as Twitter.com, YouTube.com, Facebook.com, etc. Defeat the DNC forever by revealing overwhelming evidence of widespread election fraud, which will also result in a nationwide call for a voter ID system for all future elections; solidify his own standing as the brilliant mastermind President of the USA for a second term (and perhaps a third, we dare say).

RECOUNTS no longer matter; the certification of votes is now irrelevant The action plan to achieve all this is under way as you read this.

Team Trump already has the full transaction logs of Dominion Voting Systems election alterations, and with raids taking place in Europe, more evidence of foreign interference is being secured.

Importantly, this enormous cache of vote fraud evidence will be more than sufficient for President Trump to present this evidence to the American people, then declare an illegal insurrection attempt against the United States of America while deploying US Marshals or military police to arrest the treasonous actors in the United States who attempted to carry out this elaborate criminal fraud.

No wonder John Brennan appears to be crapping himself every time he appears on live television. Once Trump’s plan is fully activated, people like Brennan will need a lifetime supply of Depends.

Once all the evidence is compiled and presented, President Trump merely needs to declare the entire election to be null and void as an artifact of a failed foreign coup attempt against the United States, aided by treasonous operators inside the Democrat party and certain dark corners of the intelligence community (CIA, FBI, etc.).

As an immutable legal principle, any party that engages in a social contract (such as an election) and then cheats to try to unfairly 'win' that contract, is disqualified by default.

You cannot win an election by stealing it.

There is overwhelming legal precedent for this in court decisions from both SCOTUS and Federal district courts.

The recounts are irrelevant. The 'certification' of the fraudulent votes is just theater. None of that matters once the overwhelming fraudulent nature of the entire operation is documented and revealed to all. We’ve already won! Trump has already won this election!

The treasonous enemies of America have already been caught. They will face criminal charges by the thousands as all this plays out, unless they flee the country first. And the DOJ is about to drop the hammer on the entire operation.

The American people are with Trump — including many Democrats who are now sickened by what they witnessed take place with wholesale left-wing election theft. Americans will not allow their country to be stolen by foreign interests, and as we’ve mentioned before, if Trump needs to call up every able-bodied man in America to converge on Washington D.C. fully armed with courage, millions of patriots will arrive to defend this constitutional republic against its enemies, both foreign and domestic.

Trump no longer needs to win recounts, and he certainly doesn’t need the media on his side. They won’t be around much longer anyway. All Trump needs is to continue gathering evidence, prepare to present it to the world, and continue to garner support from millions of Americans who are ready to lay their lives on the line, if necessary, to defend this nation.

We win if we choose to win. The only way we lose is if we surrender to the criminals on the Left. I’m amazed…..I really need time to let this all sink in….

DAMN! This is amazing! 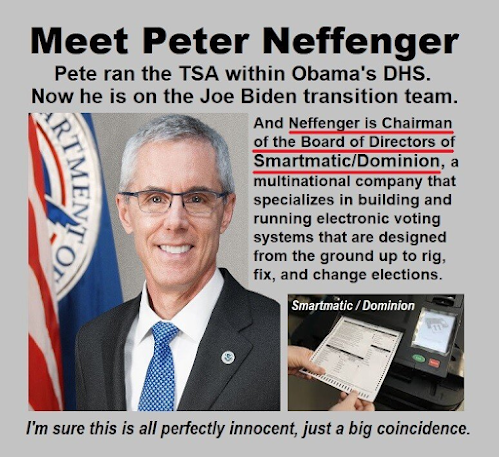 NOTICE:  I received this document from a friend - I have not had time to verify it but from what I've read (and heard from attorneys like Sidney Powell) there is lots of 'there THERE'!!! The ease with which a nation and it's elections can be violated is amazing, scary as hell, and beyond disgusting.  VOTER I.D. would be a good start!  We also do NOT need two MONTHS of people voting! Let those in Congress know your thoughts on this (while we hopefully will still have a chance.....RAP)