THE MEANING OF A FLAG-DRAPED COFFIN

All  Americans should be given this lesson.  Those who think that America is an arrogant nation should really reconsider that thought.  Our founding fathers used GOD's word and teachings to establish our Great Nation and I think it's high time Americans get re-educated about this Nation's history.

Pass it along and be proud of the country we live in and even more proud of those who serve to protect  our 'GOD GIVEN' rights and freedoms.
I  hope you take the time to read this ... To understand what the flag draped coffin really means ... Here is how to understand the flag that  laid upon it and is surrendered to so many widows and  widowers.

Do you know that at military funerals, the 21-gun  salute stands for the sum of the numbers in the  year 1776?

Have you ever noticed the honor guard pays meticulous attention to correctly folding the United States of America Flag 13 times?  You  probably thought it was to symbolize the original 13 colonies, but we  learn something new every day!

The 1st fold of the flag is a symbol of life.

The 2nd fold is a symbol of the belief in eternal life.

The 3rd fold is made in honor and remembrance of the veterans departing the ranks who gave a portion of their lives for the defense of the country to attain peace throughout the world.

The 4th fold represents the weaker nature, for as American citizens trusting in God, it is to Him we turn in times of peace as well as in time of war for His divine  guidance.

The 5th fold is a tribute to the country, for in the words of Stephen Decatur, 'Our Country, in dealing with other countries, may she always be right; but it is still  our country, right or wrong.'

The 6th fold is for where people's hearts lie.  It is with their heart that they pledge allegiance to the flag of the United States Of America , and the Republic for which it stands, one Nation under God, indivisible, with Liberty and Justice for all.

The 7th fold is a tribute to its Armed Forces, for it is through the Armed Forces that they protect  their country and their flag against all her enemies, whether they be found within or without the boundaries of their republic.

The 8th fold is a tribute to the one who entered into the valley of the shadow of death, that we might see the light of day.

The 9th fold is a tribute to womanhood, and Mothers.  For it has been through their faith, their love, loyalty and devotion that the character of the men and women who have made this country great has been  molded.

The 10th fold is a tribute to the father, for he, too, has given his sons  and daughters for the defense of their country since they were first born.

The 11th fold represents the lower portion of the seal of King  David and King Solomon and glorifies in the Hebrews eyes, the God of Abraham, Isaac and Jacob.

The 12th fold represents an emblem of eternity and glorifies, in the  Christians eyes, God the Father, the Son and Holy Spirit.

The 13th fold, or when the flag is completely folded, the stars are uppermost reminding them of their nations motto, 'In God We Trust.'

After the flag is completely folded and tucked in, it takes on the appearance of a cocked hat, ever reminding us of the soldiers who served under General George Washington, and the Sailors and Marines who served under Captain John Paul Jones, who were followed by their comrades and shipmates in the Armed Forces of the United States, preserving for them the rights, privileges and freedoms they enjoy  today.

There are some traditions and ways of doing things that have deep meaning.

In the future, you'll see flags folded and now you will know why.
Share  this with the children you love and all others who love what is referred to, the symbol of ' Liberty and Freedom.'

MAYBE  THE SUPREME COURT SHOULD READ THIS EXPLANATION BEFORE THEY RENDER THEIR DECISION ON THE PLEDGE OF ALLEGIANCE.  FORWARD  IT; MAYBE SOMEONE WITH THE NECESSARY POWER, OR POLITICAL AND FINANCIAL INFLUENCE, WILL GET IT TO THEM.

IN  THE MEANTIME, MAY GOD PROTECT US ALWAYS, BECAUSE WE ARE AND ALWAYS SHALL BE ONE  NATION, UNDER GOD, WITH LIBERTY AND  JUSTICE FOR ALL.
at November 29, 2016 No comments:

IT REALLY DOES SUCK TO BE A LIBERAL!!!

The election in videos....

This first video came out on October 26.  Michael Moore - one of Hollywood's most liberal people, had been predicting a Trump victory for months.  It seems he is the ONLY person on the left who actually saw the writing on the wall.  The mainstream media (newspapers, commentators, pollsters) never saw a Trump victory coming.  (But it seems many people in Hillary's inner circle DID, but the Clintons ignored them because they knew better.)  Michael Moore - of all people - had tapped in to the feelings of the silent majority.

Caution:  This video contains some vile language along with the truth!


Trump was ridiculed by every possible group when he began his journey to be president.  Never has a Republican candidate had to run against Democrats, the entire media machine, and his own party!  But that never slowed Donald Trump down.

The left was completely blindsided by Trump's victory.  Actually a lot of people on the RIGHT were, too.  I mentioned on a previous blog that after watching Michael Moore, I had a gut feeling Trump would win.

The reaction of the left is both amazing and disgusting.  We have raised a generation of YOUNG PEOPLE who have been coddled and sheltered and NEVER TAUGHT TO DEAL WITH LOSING.  Think about this for a moment.... how many parents out there have children with 'participation trophies' in their kids' rooms???  Remember when they were young and played sports.... and no one kept score?  Remember when schools used to have a Valedictorian and a Salutatorian in their senior classes?  But no longer, because it hurts the feelings of those who did NOT get that honor.  It doesn't matter that some students worked their asses off to EARN that honor.  We cannot hurt other, less bright or studious kids.... so no one is honored and no one learns but value of busting their butt to succeed.  And then these kids are dumped into the real world... some make it to college, where they need a 'safe space' to go where no one hurts their feelings, or they are in the real world where you have to actually work for a living, and they are totally unprepared for THAT sort of competition.

Those are many of the people you see in the next two videos - millennials unable to cope with loss or defeat - coming unglued because they did not get their way.  We are turning our children into weak, pathetic whiners, and I'm thinking it's too late to change that..... many of these kids will be facing a lifetime of valium, prozac and paxil.


TRUMP WINS!  And O'Reilly explains why...


This lady speaks for me.... I share her happiness!


One last high five for the new direction of our country.  The good Lord has given America one more chance.  I pray Trump runs with it.... he has MY support!

Email ThisBlogThis!Share to TwitterShare to FacebookShare to Pinterest
Labels: get over it liberals, rioting, sucks to be a liberal, whiners riot

Downtown Los Angeles, CALIFORNIA: Anti-Trump Protests Lead to More Than 200 Arrests (according to the LAPD)

The Latest: Anti-Trump protesters shut down I-25 in Denver, COLORADO

I am truly suffering from a morning after headache... celebrating Donald Trump's ‘surprise’ victory all day Wednesday, and into Wednesday night, with friends who are members of the Ladies Republican Militia.  Oh….my……GOD!  What a wonderful time we had, because we all just felt in our gut that Hillary Clinton – not known for her honor or honesty – would somehow make certain she because the next president.

My friends have gone home, and as I fight through the fog of reality, I find that I smile so much my cheeks ache.

For the last 48 hours, I have listened to the talking heads, the pollsters, the members of the mainstream media discussing how totally wrong they were… and the truth is – THEY WERE ALL HORRIBLY WRONG!  All any of them had to do was LOOK AT A TRUMP RALLY and then look at a Clinton or a Kaine rally.

This was a photo late in the race of a Hillary rally... see anything odd?  The circles were added later! 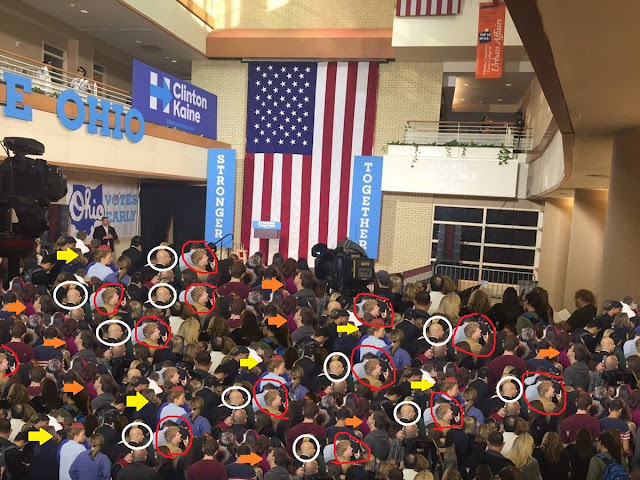 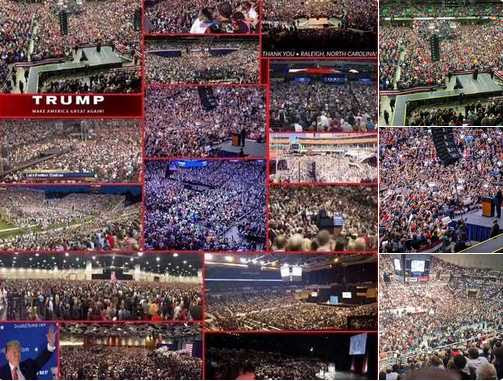 And now... we are a nation trying to deal with the 'morning after'.... America (and much of the world) is in shock... half crying and the other half, like ME, grinning and breathing a sigh of relief that maybe, JUST MAYBE, this man can MAKE AMERICA GREAT AGAIN....

Finally, look at the headlines at the top of this article... notice anything interesting?  I'll give you a hint..........

THEY ARE ALL HEADLINES FROM LOCAL AREA NEWSPAPERS ABOUT POST-ELECTION RIOTING AND VIOLENCE.... THAT IS OCCURRING IN STATES HILLARY CLINTON WON!!!

I'm not saying there aren't demonstrations and marching and looting and fighting in other states - but nothing compared to what's happening in Illinois, California, Colorado, Oregon, and New York state - all states in Hillary's column.

Yup - and if you go to YouTube and do a search for 'presidential polls' you will find video after video after video saying Trump would win and win large.  Social media knew this would happen because it had the pulse of the 'regular people' - most of whom had/have fake ID's and were therefore not afraid to SAY who they were for!

It was only when I saw the video below that I truly believed that Trump would win.  Michael Moore – a Hollywood left-wing MEGA-LIBERAL I’ve disliked forever – exposes WHY people have driven for miles and miles to see Trump - stood in line for hour and hours to listen to Donald Trump.  Michael Moore hit the nail on the head!

When I heard this video,  I knew the election was over.
(Caution – explicit language)