After an lengthy military investigation into the activities of Bowe Bergdahl's behavior in Afghanistan, today, the UCMJ (Uniformed Code of Military Justice) has charged Bergdahl with desertion.

Below is a quote from the Washington Post regarding the charges.  Six members of the military were killed in attempts to 'rescue' Bergdahl.  But listen to what our president had to say the day Bowe Bergdahl was 'rescued'....  and Barack released FIVE TERRORISTS in exchange for this traitor!

Bergdahl will go before an Article 32 investigation (military version of a Grand Jury) and then tried in a military court for any charges deemed relevant.

How does that 'crow' taste, Barack? 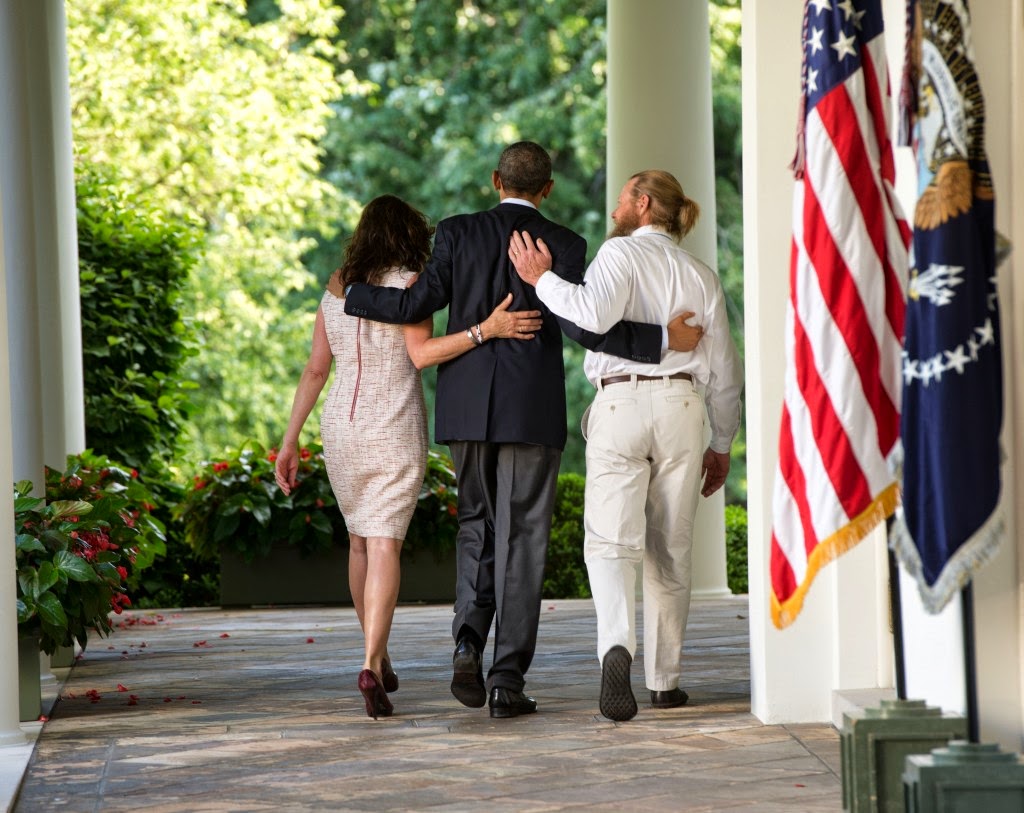 Bergdahl will faces charges under articles 85 and 99 of the military’s Uniform Code of Military Justice....

Article 85, desertion, applies to a service member who “quits his unit, organization, or place of duty with intent to avoid hazardous duty or to shirk important service.” The maximum sentence for those convicted is death, although no soldier has faced that punishment since 1944, when Pvt. Eddie Slovik was executed by a firing squad after running away from combat duty in France.

Article 99, misbehavior before the enemy, applies to a service member who has run away in the face of the enemy, abandoned his unit, cast aside his weapon or ammunition or willfully failed “to do his utmost to encounter, engage, capture, or destroy any enemy troops, combatants, vessels, aircraft, or any other thing, which it is his duty so to encounter, engage, capture, or destroy.”

As an aside, late yesterday the Senate voted down Obama's budget in a 1-98 vote..... all together now:  "AWWWWWWWW"

OMG! SENATOR TED CRUZ IS SIGNING UP FOR OBAMACARE!!!!

Signing up for Obamacare is a brilliant move by Senator Ted Cruz.

His wife Heidi is a managing director at Goldman Sachs, and as such most likely has a Cadillac insurance plan covering the family. By taking unpaid leave (which is her intent so she can campaign with him) that insurance will become invalid.  So Cruz had two choices:  Pass in getting insurance and pay the penalty, or PURCHASE insurance as the law requires.

Now..... if you think the insurance for CONGRESS isn't also a Cadillac plan - think again. But Cruz is forgoing THAT as well, and opting to take the route many 'regular people' have as their only choice..... 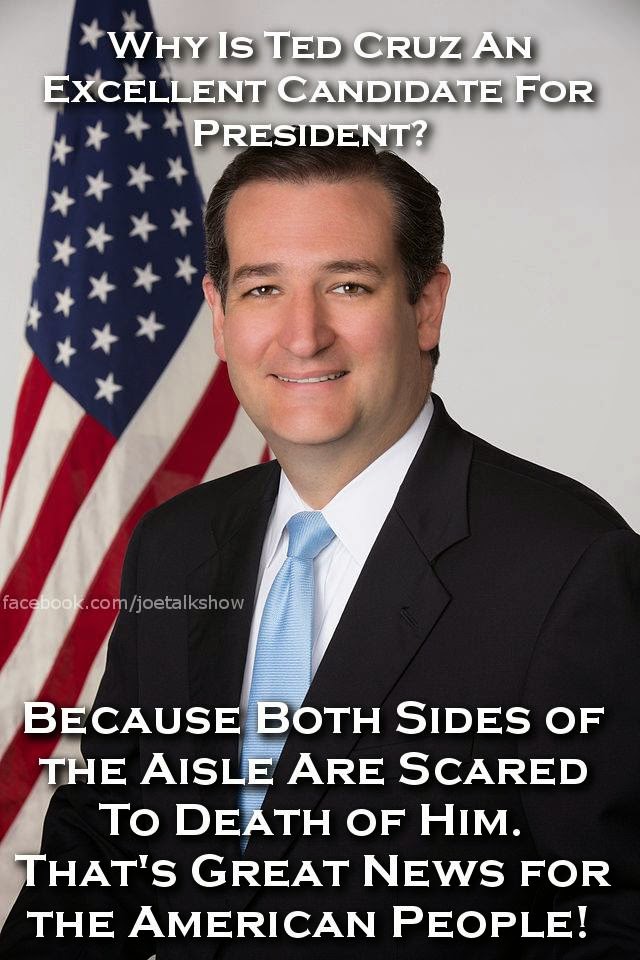 Remember that there are 'coverage tiers' in Obamacare, so you can get whatever tier you are willing to pay for. So Cruz WILL have his family insured..... but NOW - he's (1) one of the regular people and (2) he will learn about the Obamacare enrollment and coverage issues from the ground up - making him VERY KNOWLEDGEABLE about what 'regular people' are faced with. He can attack Obamacare from a position of personal involvement and knowledge.....

He will probably be the only member of Congress that can do that!

The talking heads on the left are screaming that Cruz is a hypocrite.... but if he opted NOT to get insurance, they would scream that he's a lawbreaker!  Cruz has totally taken them in..... hook, line, and sinker!

Congratulations on your huge electoral victory.

You have approximately two years ahead during which time you should not count on the United States for military support.  Hopefully after the 2016 elections here, there will be a president in the White House that will again treat Israel as an ally and not a burr under his saddle.  (As an aside, congratulations on making Obama piss his pannies.)  You also cannot count on Obama's administration to have your back in the United Nations.

Until such time as we have an adult in the White House, I would suggest you look around your area and form a coalition with:

Form a mutual defense coalition with these countries who share the same issues and keep Israel safe. 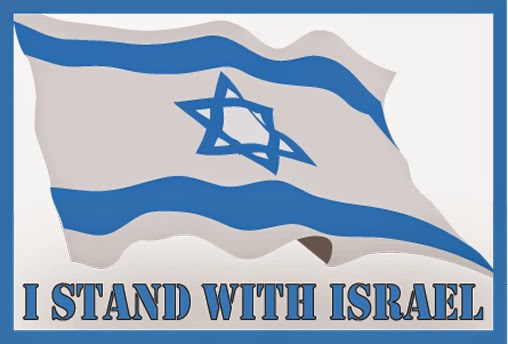 HINTS ON HOW TO GET THAT FIRST JOB

In the long haul, the very best way to get a job is to get an education.  It’s free, available to everyone, and no one can EVER take that away from you.

Generally, the more education you have….. the further you will go in life.  There are exceptions but people who ‘strike it rich’ are few and far between so while you may dream of that, you should work like it won’t happen.  You can be what you want to be in this country, but most of us have to work for it!

For the short term, get that first job.  There is tremendous pride and self-esteem in EARNING something by your own efforts.  It makes you stand taller and want to do better.  Success breeds success.  Below are a few suggestions…

1 – LEARN TO SPEAK ENGLISH!!!  By that I mean, learn to make a proper sentence with the correct verb tense, and a subject and a predicate.  Apparently public schools are NOT teaching students to speak proper English, but for goodness sake – in this age of technology, anyone wanting to better themselves can listen to almost any person in the news media and concentrate not on the propaganda, but HOW it’s delivered.  It’s called sentences….. in English.  LEARN IT – IT IS THE FIRST IMPRESSION A PROSPECTIVE EMPLOYER GETS FROM YOU.

2 – LEARN HOW TO DRESS!!!!  You do not have to dress in designer clothes or a suit when applying for a job.  But you DO need to be clean and neat.  FFS – GUYS - PULL UP YOUR PANTS, PUT ON A BELT, AND TUCK IN YOUR SHIRT TAIL IN.  GIRLS – DO NOT WEAR SPANDEX (OR ANY OTHER FABRIC THAT FITS LIKE SPANDEX – unless of course you’re applying for a job as a street whore.) That includes jeans!  You can get an outfit at Walmart for less money than a manicure. Clothes should be clean and not look like you slept in them.  Fasten your shoes - and NO FLIP-FLOPS!

3 – CLEAN YOURSELF UP!!!  Wash your hair and your face, brush your teeth, and minimize the face paint, and go easy on the jewelry and long, decorated fingernails! (see job category in #2 above)

4 – LEARN SOME MANNERS!!!  ‘Please’ and ‘thank you’ are easy words to learn.  Be polite.  Listen to the interviewer and answer the questions honestly and briefly.  Ask questions if you have any, and if you WANT the job, tell that person that YOU DO.  And explain WHY you would be a good employee (prompt, hard worker, dependable, quick learner, etc.)  Again – let the interviewer know you want the job, and thank them for the interview.

Entry level jobs are becoming increasingly scarce in this country because of mechanization on the one end, and the mandatory rise in entry level wages on the other. Getting that first job is a huge step to the type of future you will have.  Remember that the first job is the beginning – it is not meant to be a career choice.

Two important things to remember are:

Never think a job is ‘beneath’ you, and…

It is easier to GET a BETTER job if you HAVE a job (i.e. a good work ethic and work history).

Email ThisBlogThis!Share to TwitterShare to FacebookShare to Pinterest
Labels: first job, get a job

RACISM IS BEING TAUGHT IN SCHOOL....

I'm not here to argue about racism.  It's here in America, it always HAS been here, and it always WILL be.  No amount of laws or regulation will eradicate it.  In fact, programs like affirmative action only increase racism. It's wrong to give one group of citizens preference over another group because of the color of their skin.  We have LAWS against that.  And as an aside, I think it is an insult to every black student for their own government to think they aren't smart enough to get into college without special 'dispensations'.

Having said that.... our children are being taught racism by public schools...

In a January article in Imprimis (a monthly publication from Hillsdale College) Jason Riley (Wall Street Journal) wrote an article entitled Race Relations and Law Enforcement that is worth your time to read.... the link is below.  If you've ever heard Mr. Riley speak, he is well educated and very eloquent. 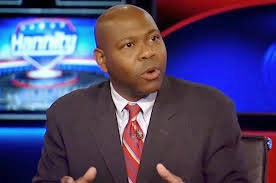 In this article, Mr. Riley recounts visiting his sister in Buffalo, NY and chatting with her daughter, his niece, who was in the second grade.


“…..I was asking her about school, her favorite subjects, that sort of thing, when she stopped me and said, “Uncle Jason, why you talk white?” Then she turned to her little friend who was there and said, “Don’t my uncle sound white? Why he tryin’ to sound so smart?”

Riley's question to his sister should have been:  WHO IS TEACHING MY NIECE ENGLISH???

Email ThisBlogThis!Share to TwitterShare to FacebookShare to Pinterest
Labels: racism

Don't know HOW I missed this one!  Thanks, Punkin!

Death of a Nation...

How EXACTLY did we become a nation where we welcome our government being lawless and oppressive? And think about it; we have the IRS targeting conservative groups, a congress and President forcing us to purchase something many don’t want, a state department that kills up to 250,000 jobs through the Keystone XL pipeline, an EPA that is systematically regulating traditional energy out of existence, a first lady that dictates what the kids can eat, a Byzantine tax structure that punishes the productive in favor of the non-productive. And that is just for starters…….I didn’t even mention the NSA spying on US citizens (I guess I did now).

This administration routinely lies to the nation, through omission or commission, and also routinely works against the interest of a nation which was once the leading power in the world. We have done nothing about ISIS, we won’t call Islam terrorism, we won’t curb spending, we refuse to develop our own energy (BTW…..when I am President, on day one the EPA, Education Department, Energy Department and most of the State Department are GONE).

And yet, through it all, this administration pisses on our leg and say’s that it is merely rain. It praises itself on lower unemployment numbers while not counting most of the unemployed (and taxing the rest of us to pay for them). It turns it back on our closest allies, retreats from a two front war, allows four high profile Americans to be killed in Benghazi, absolutely refuses to hold any democrat accountable for anything while firing flag officers, and enabling our enemies. The economy sucks for those of us that work in it (which is only 51% of us…..and I don’t care what you are told about a recovery; if you have a job, keep it, there is not another one waiting for you out there).

And this is not rhetoric, this is provable if you are a living, thinking creature. All you have to do is listen, read and research. This administration is a train wreck and is train wrecking the entire nation. And the media, the Josef Goebbels of this administration not only plays along, but absolutely supports it.
So, my first question “How EXACTLY did we become a nation where we welcome our government being lawless and oppressive?” was largely rhetorical, because I am pretty sure we all know.

1. Public education is a disgrace
2. Abortion has devalued life
3. Easy divorce or no marriage has destroyed the family unit
4. Courts operating outside of the Constitution ‘creating’ law
5. A Congress of “law makers” that do not know the law (or want to know it)
6. A President that doesn’t care about the law
7. The refusal across the board to hold government officials accountable
8. The absolute stupidity of the electorate
9. And, an almost 200 year drive by the left to deconstruct, if not nullify the Constitution.

That should do it for starters.  Anyone care about reversing any of this?

Email ThisBlogThis!Share to TwitterShare to FacebookShare to Pinterest
Labels: America lost, death of a nation

DIXON DIAZ DOES IT AGAIN!

Thanks as always - these are dead on!

Google can KMA - I bought my own .com

Feel free to visit me there!